Today Subject: "I Got a Man" by Positive K 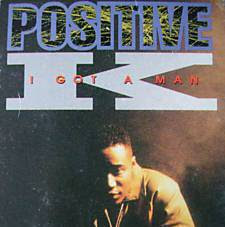 When I was 10, I learned two extremely valuable lessons in regards to women. One was to never trust a big butt and a smile and the other was if you see a fine girl, just bust a move. It was not until I was 12 that I learned the power of persistence from the Pepe LePew of hip hop, Positive K. With one question, he summed up talking to and hooking up with attached women by asking "what's your man got to do with me" on his hit single, "I Got a Man."


As I share my thoughts with you on this song, I still find myself rapping along to it. The lyrics are a pen stroke of pure genius. Guys, how many times has a woman asked if you are chef because you keep feeding them soup? Ladies, how many times has a guy just not taken no for an answer and then told you that if you sweat yourself, you might find yourself by yourself? This happens quite frequently I would imagine as men can be relentless in pursuing a woman. If this song were made today, he would just slip her a roofie cocktail and still get the date. Instead, you have a serious and humorous song about a guy trying to talk to a woman who is and is not interested in him. She offers friendship and he is like I already have enough friends (thanks, Kelvin for that line). Realistically, Positive K is only rapping about what we are all thinking at that moment. Hell, I am thinking it now and I am just writing this.

The hook to this song is killer and is a great use of call and response. In fact, I would say it is probably the best use of it in all of hip hop (sadly, this includes "from the windows to the wall/to the wall" and every time Dr. Dre says "hell yeah"). Even more interesting is that Positive K provided female vocals to this track with a little studio magic. So, basically, he is asking himself out on a date and rejecting himself. I am sure this is some weird form of narcissism in which he is the obtainable object of desire and the unattainable goal.

Musically, there is little to nothing that separates it from any other funk sampled, early 90's hip hop song not produced by Dr. Dre. This is the biggest downfall of the song as it really dates the song to 1992. In fact, if you listen to it right now, "Gypsy Woman" by Crystal Waters will probably start playing after the last note. Sometimes, this is not a problem as hearing something from a certain time reminds you of where you were but in this case, it is a little distracting as it now feels like a novelty song from a time when partying

Surprisingly, this song gets little to no airplay on radio stations that play "hits from the 90's." Here is a song that peaked at #14 on the Billboard Hot 100 and is seeped in the smell of hits from the 90's cologne. Why I only have to resort to YouTube to hear this song is a bit sad. Every other hip hop (full-on or based in) song about the pursuit of women ("Poison," "Bust a Move") still receives airplay. This song deserves the same treatment. Perhaps, we rarely hear it as it never won any awards despite being a fixture on MTV and radio (circa 1992). That, in itself, is sad for numerous reasons. After all, without royalty checks, can Positive K really say "boom badda, my pockets are getting fatter."

Pros:
Memorable hook.
"I got a man/What's your man got to do with me/I got a man/I'm not trying to hear that see."
Peaked at #14 on Billboard Hot 100.
Positive K was the voices of the women (perhaps to avoid a song like "Opposites Attract").
Interesting and humorous take on male-female relationships in regards to one night stands and, possibly, relationships.
Lyrically, the song is brilliant.

Cons:
Promotes infidelity.
No notable awards.
Musically, it is severely dated.
Rarely, if even at all, played today.
Positive K was the voices of the women (which avoided a song like "Opposites Attract").

The fact that the song is rarely played today and did not achieve much after 1992 (seriously, not even a cover song?) should state that this song is a blunder as should the dated sound of the instrumental track. The lyrics, however, are the song's true saving grace as men will never stop chasing women, attainable and unattainable, just as they will never stop using cheesy pickup lines in an attempt to sleep with them. That, on its own merit, keeps this song more relevant than it should be 20 years later. It might even be safe to say that this song will always be relevant for that reason alone. "I Got a Man" is truly a wonder in that sense and as long as I keep meeting women, I will always have a line or twenty to use on them before asking and wondering "what's your man got to do with me."