Yes, indeed, this is a very special edition of Video Graveyard featuring a video that truly scared me as a kid and still creeps me out as an adult. That video is Herbie Hancock's "Rockit," also known as the other musical performance clip that scared me that was not the "Time Warp" party scene in Rocky Horror Picture Show. Mind you, I was between three and six when I encountered both yet was enamored by the Evil Dead 2 ads in the paper when I was seven because was poster for it looked so cool.

Anyway, I am getting off point and want to go on record to say that this is, hands down, the scariest video I have ever watched. There are freaky robot legs walking around a living room, a weird pterodactyl looking robot and scary mannequins moving about. Yikes! Several years ago, my ex teased me about still being scared of the video despite having a love for robots and wanting a robot best friend when I was a kid. I then showed her this video and she understood my genuine fear of what happens when Herbie Hancock goes hip hop and uses vocoders. The song, however, still rocks.

Looking for an awesome way to jump start your weekend? Free Moral Agents (featuring Isiah "Ikey" Owens of The Mars Volta) will performing at Beauty Bar tonight at 10 p.m. The awesome part to this, well besides the music, is that the show is free with and RSVP to chicagoRSVP@thebeautybar.com, otherwise it's only five bucks. Great, experimental music, free concert with RSVP, a night out...really, is there a better way to start the weekend. I think not. 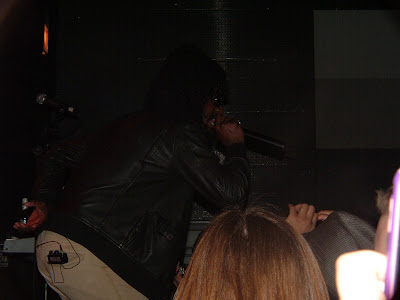 The last time I saw Toronto emcee Kevin Brereton aka k-os was opening for Gym Class Heroes at House of Blues in 2007. That night, he, along with fellow opener P.O.S., managed to put on a show that far outshone the headliner's set. With that said, his headlining spot at the more intimate Lincoln Hall on Saturday night was nothing short of incredible. His 90-minute set along with opening performances from Astronautalis and Shad help put together one magical night loaded with memorable grooves and talented rhyming.
Continue
Knowledge Dropped by Bärrÿ 1 comment:

Sony Walkman, welcome to the land of other retired forms of entertainment such as 8-tracks, Betamax cassettes, mini-discs and the more recently departed HD-DVD. Thirty years after your existence, you have now been relieved off a duty no one even knew you were still performing. Granted, I knew cassettes were still being manufactured, perhaps as retro and/or kitsch collector items (to which I have no problem with and was tempted to buy the new Of Montreal and Local H releases on) but was unaware that Sony even still made the Walkman.

The song is excellent and the video is neither old nor bad. It, however, is long and confusing so that should count for something. Kanye West's 34-minute video for "Runaway" is either a look at a bloated, excessive exercise in music video making, a infomercial for West's new album, My Beautiful Dark Twisted Fantasy

(due Nov. 22) or one of the most brilliant things I have ever watched. I am not sure which one it is but the answer lies somewhere within those three things. The video is, or so I think, a metaphor for the last couple of years of West's life from the events leading up to 808's and Heartbreak

to the embarrassing Taylor Swift VMA moment last year and its backlash. If not, West just out-lynched David Lynch and released some bizarre video with a bird woman screeching at turkeys, a three-minute ballerina solo, a marching band parade with Michael Jackson's head, a dinner party, fire, samples of his new album and atrocious acting. On that note, here is the 34-minute, uncensored clip to "Runaway" as well as the edited video if you would rather just get to the song. 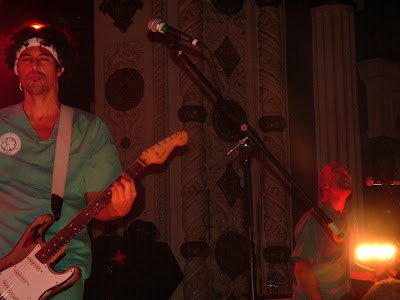 As I waited for the opening act, I chatted with two young ladies about Pepper as I was unfamiliar with their music. To this, they offered me the following notes: "It's like Blink-182 but with a nurse lady and better," stated Katrina and "If you're having a bad day, listen to Pepper and it'll lift your spirits and you'll feel better," chimed Kaitlyn. In a roundabout way, that comment best describes Thursday's concert. It was an assortment of musical genres designed for people looking to have a good time and enjoy live music.
Continue
Knowledge Dropped by Bärrÿ No comments:

Jennifer Corvino Will Have Her Revenge (October Mixtape) 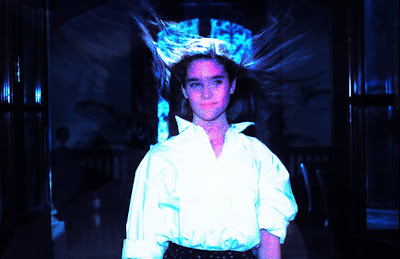 Side B: Creepers
01. The World's Most Famous Undertaker by Skeleton Key
02. Pet Sematary by Ramones
03. Little Ghost by The White Stripes
04. Spooky by The Grays
05. Dracula's Wedding by Outkast feat. Kelis
06. Zombie by Nellie McKay

In support of the excellent The Trouble with Angels

, Filter begins their No Love Tour in Dallas tonight. Tour dates are listed after the jump and if you have not had a chance to pick up their new album, you owe it to yourself because it does not disappoint in the least.
Continue
Knowledge Dropped by Bärrÿ 2 comments:

Email ThisBlogThis!Share to TwitterShare to FacebookShare to Pinterest
Labels: Filter

Two more Jon Spencer Blues Explosion reissues are due in stores this week. Tuesday (October 19) sees the re-releases of JSBX's 1994 masterpiece, Orange, now with the Experimental Remixes EP and bonus tracks added on as well as 1998's Acme, now with Acme Plus included (previously known as Xtra Acme USA in the states). Spinner is streaming both albums this week which you can check out here. Tracklists and videos can be found after the jump. 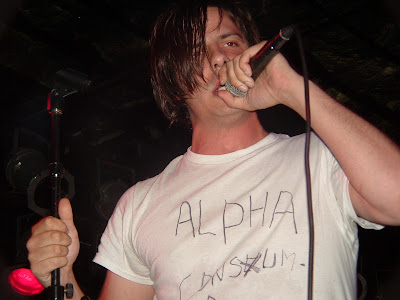 Michael Larsen, better known as Eyedea, passed away yesterday at the age of 28. The cause of the MC's untimely passing is unknown. Eyedea's mother, Kathy Averil, has set up a Facebook memorial page to honor her son where you can share your thoughts as well as offer donations to the MC's family. As part of Eyedea & Abilities, the duo released By the Throat last Summer.
Continue
Knowledge Dropped by Bärrÿ No comments:

Email ThisBlogThis!Share to TwitterShare to FacebookShare to Pinterest
Labels: Eyedea

My Morning Jacket performed a live webcast for Live on Letterman last night in addition to appearing on Late Show with David Letterman to promote their upcoming five night residency at Terminal 5. Check out both videos after the jump and read Jim James' Live on Letterman interview here. 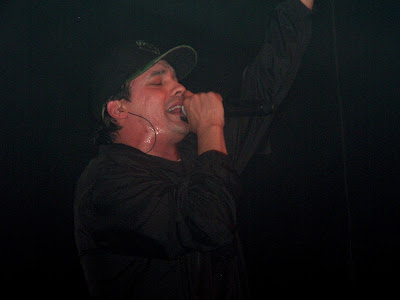 "This is as close to church as some of us get," said Slug, MC for Minneapolis hip hop group Atmosphere as he addressed the packed audience at Congress Theater on Thursday night. If that was close to church, then the audience members were more than honored to be its congregation. On the last date of the To All My Friends tour, each of the performers treated the show more like a celebration of their sounds and hip hop instead of the end of a month-long tour.

Gorillaz stopped by Late Show with David Letterman to promote their North American tour with N.E.R.D and Little Dragon. In addition to this visit, Gorillaz performed a 45-minute concert for the audience. The performance  was filmed by the Letterman crew and, needless to say, it rocks. Check out the performance after the jump.

Sounds of the Weekend

The weekend is here and there are plenty of exciting opportunities to check out music throughout the city from Ok Go to Riot Fest 2010 to a couple of free shows. So, after reading this, get out there and get your musical fix.

There Is Nothing Headbanging About This Ball

Oh, how I thought you gave up the facade of playing videos the moment Spencer Pratt debuted his creepy flesh -colored beard or relegated your rejected remnants and skeletons to MTV2. This is what I thought until I stumbled across the decayed shell of what they consider to be Headbanger's Ball. MTV, like Hollywood, you continue to urinate all over our childhood dreams and loves. Shame on you. 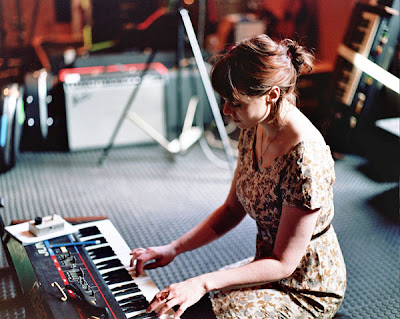 (photo from katenash.co.uk)
Kate Nash is set to begin a new North American tour is support of her sophomore release, My Best Friend is You, this October. Accompanying UK songstress on her trek will be fellow UK folk-pop trio, Peggy Sue, who have one of the best albums of the year out currently in Fossils and Other Phantoms. Catch them in a city nearest you beginning late October.

Free Downloads! Did I Mention Free...Yeah, I Did!

Who does not like awesomeness that comes along with the word "free"? What is better is when an artist wants you to hear their art and offer it to you free of charge. That is what I have here, ladies and gentlemen, a batch of free releases from the likes of Imani Coppola, Psalm One, Jojo, Charles Hamilton and Metallica. Also, there are plenty of samplers to choose from. 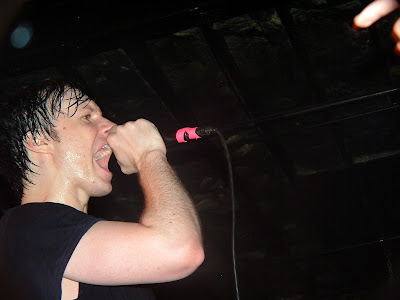 Ladies and gentlemen, you may once again start the riot. After a 10 year absence, Atari Teenage Riot has returned to do what they do best: make noise and rally listening ears against political injustice, although not necessarily in that order. As Friday night's performance proved, 10 years away and a new lineup have done very little to soften Alec Empire and company's sonic and visual assault.

While October is the month for all things ghoulish and macabre, it is also a very interesting month filled with new releases (The Corin Tucker Band, Tricky, KT Tunstall, Finger Eleven Kylesa), reissues (Crowbar, Jon Spencer Blues Explosion, Morrissey) and classics from the vault (Bob Dylan, Liz Phair...well, the Girlysound portion of the double disc). In addition to all of these albums, there are several music games coming out from the debuts of Def Jam: Rapstar and Power Gig: The Rise of the SixString to the highly anticipated sequels of DJ Hero and Rock Band. Whatever you buy this month, be sure to play it loud at your Halloween party.

Fun Things To Do This Weekend

Blogger's Note: This was meant to be posted yesterday but due to time constraints, it was not posted. It, however, has been updated to include events for today and tomorrow.

Looking for some exciting ways to spend your money this weekend. Here are a few ideas that will entertain your musical spirit as well as well as a couple of non-musical selections.