Pick Of The Week: Skeleton Key's Fantastic Spikes Through Balloon 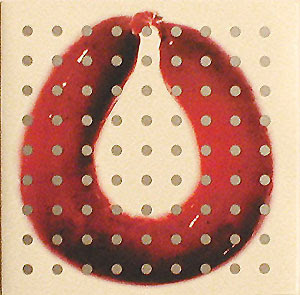 Yes, this is an album from 1997 and yes, it is completely out of print. That does not prevent it from being amazingly awesome. In fact, Skeleton Key's major label debut ranks pretty high on the list of best albums you have probably never heard due to lack of label and/or commercial support (mind you, this is according to my tastes and ears and also includes Milla's The Divine Comedy, Toadies' Hell Below/Stars Above and Far's Water and Solutions).

Fantastic Spikes Through Balloon is a bizarre 34 minute ride through the mind of a band that has a member listed as a "junk percussionist" and includes with songs titled "The World's Most Famous Undertaker." Bizarre as it may seem upon initial listening, the album is extremely catchy with its blend of alternative, punk, pop and brilliantly executed instrumentation. "Wide Open" bounces back and forth with its rubbery bass and percussion clanging. The distorted punk-ish groove of "Vomit Ascot" is heads above many of the chart topping acts listing themselves as punk in 1997. The album's true highlight is "Dear Reader" with its slow buildup and creepy muted guitar, reminiscent of a clock ticking away the minutes until the song breaks into a huge bridge before slipping back into the creepiness.

Skeleton Key would release two more enjoyable albums after this, 2002's Obtainium and 2005's The Lyon's Quintette but neither could match the quirkiness of this particular release. For a major label such as Capitol to release this album says there is something here worth your invested time. If not, there were some crazy geniuses in A&R taking a huge gamble on one of the best cult bands you have probably never heard of. That is this week's pick, Skeleton Key's Fantastic Spikes Through Balloon. Amazon

has several used and a few new copies of it. If not there, eBay is a excellent source for finding this album. If you are lucky, you will be able to snag one of the rare two-disc sets with the remix album included. I guarantee you that you will love this album from beginning to end.
Knowledge Dropped by Bärrÿ

Email ThisBlogThis!Share to TwitterShare to FacebookShare to Pinterest
Labels: Pick Of The Week, Skeleton Key