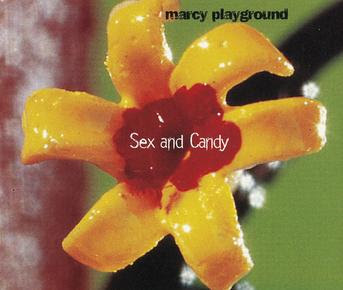 A song about two things that I knew absolutely nothing about in high school and barely know anything about in my adult life as well. Still, I felt drawn to its low key, almost monotonous, verses and mellow chorus. Also, there was the need to figure out what "disco lemonade" was. Yeah, I still have no clue what that means and, at the moment, am wishing that someone was lounging in my chair and casting devious stares in my direction so it could lead to sex and candy at the moment because I could really go for Allison Brie and a Mr. Goodbar (but am willing to settle for a Kardashian and some peanut M&M's).
"Sex and Candy" always seemed like it should have been the title of a post-Scream, Canadian horror film or a really cheesy R. Kelly song. Even now, the title sounds like a title for an episode of Degrassi: the Next Generation. In a way, this is my attempt to say that this song does not deliver the potential 90's cheese factor it should have had. Instead, it has the typical mid-late 90's college yet commercial alt-rock sound found in other 90's one hit wonders like Semisonic's "Closing Time" and Deep Blue Something's "Breakfast at Tiffany's." It is, for all purposes, the song that was destined to fill many 90's countdowns, lists, flashbacks and compilations regardless of its success because it is so 90's sounding.

One of the songs greatest strengths is its length which also doubles as its weakness. There is not a lot going on in the song beyond the basic verse and chorus. There are not any solos, bridges or long instrumental parts bridging the versing and chorus together. It is just a straightforward song and, as such, it cuts away a lot of filler which is not a bad thing by any means. Seriously, there are a lot of songs on the radio that I feel should cut out every part of the song and, usually, those artists were not even kind enough to be one hit wonders. By cutting away all of the fat, the song is as basic, bare bones and catchy as a song could be to warrant any airplay. Of course, the flip side to this is that you end up usually having a song that barely goes anywhere and rarely leaves any impact beyond the listener's initial listening. Without any variations in the song, there is a lot of repetition and when added to slightly monotonous vocals, it can overstay its welcome without ever really overstaying its welcome  "Sex and Candy" falls into both groups. It has just the right length for a song containing only two verses and three choruses but it, also, never deviates which makes it a little boring.
When it comes to songs about sex (and one hit wonders about sex), "Afternoon Delight" is still the dirtiest song ever made through its use of rockets in flight and less than subtle references toward "nooners." "Sex and Candy" is about sex or public masturbation depending on your take on the lyrics. Granted, the song's protagonist saw a woman who was like double cherry pie and/or disco lemonade but he was also hanging out and thinking about himself. This leads me to think that he saw a woman, did not talk to her and found the nearest washroom to further think about himself. Either way, neither of these things are explained in the video which features vocalist John Wozniak trapped in a floor with a spider crawling around him while the other band members are tearing off pieces of the wall and taking undergarments out of a dresser. Is this to say that sex is preying on their vocalist or is he the spider preying on the woman who is really him...in the washroom thinking about himself?
The song charted pretty high on various Billboard charts and surpassed a 10-week run of Oasis' "Wonderwall" at No.1 on the Billboard Modern Rock Tracks by going 15 weeks. It also managed to rank in at No.28 on 1997's Billboard Hot 100 end of 1997 chart while still active on Hot 100 chart. If there is one thing to be said, it was a very popular song about sex and candy that barely featured either.
Pros:
Short length, easy to remember.
Memorable Chorus.
Sexually cryptic lyrics possibly about masturbation.
Still receives occasional radio rotation.
Fifteen weeks at No.1 on Billboard Modern Rock Tracks.
Peaked at No.8 on Billboard Hot 100
Has appeared in many ads for 90's compilations.
"Weird" Al Yankovic covered it.
Cons:
Short length, easy to forget.
Needs more variation musically.
Disco lemonade?
A little dated soundwise.
Sexually cryptic lyrics possibly about sex.
"Weird" Al Yankovic did not parody it...sadly.
Literally, not enough sex and candy in the song. So false promises?
While, I respect the song's charting power and enjoyability in 1997, the song seems to be no more than a reminder of what I was doing at that period of time when I hear it in 2011. At the time, that was basically pining over a girl I liked since freshman year and was too lame to really ask her out thus preventing any sex and candy with her (or any girl for several years afterward for that matter). So for me, it is a blunder because it sounds dated and the most memorable part is the chorus. By no means is it a bad song but, in retrospect, it fails to live up to deliciousness of actual sex and candy, together or separately.
Knowledge Dropped by Bärrÿ