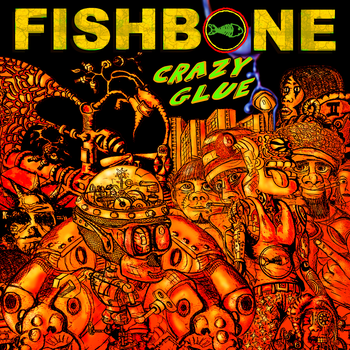 Since I was 12, Fishbone has always held a special place in my musical heart. Without a doubt, they are permanently entrenched in the list of my top five bands (and top five recording artists) of all time. While I hear the cries of bias in the distance, let me assure you that this pick is no more than a pick of the week. It is an EP from a legendary band that serves as a reminder of why I love this band so much, why other people should love this band and that their sound has influenced numerous musicians and inspired a documentary. The pick of the week is Crazy Glue by Fishbone.

This EP is notable for three main elements, all of which make this first Fishbone recording that has truly excited me for  reasons other than it being a new Fishbone release. First, on a production front, it is one of their best recordings in some time. The instruments and vocals are clear. While their previous album, Still Stuck in Your Throat musically sounded like Fishbone, it fell a bit flat in the sound department often resulting in songs sounding a bit sharper than others. This time out, you can hear the guitars, horns and rhythm section as it melodically and, at times, aggressively plays out the notes which is how a band with distinctive personalities should be heard. Secondly, this album marks the second studio recording of the current lineup (first with returning vocalist Walt Kibby) which finally showcases their combined talents and efforts into the band. One problem with the previous album came from several tracks being around for years (and with a previous lineup) before seeing an official release. As such, the lineup came into the tracks and wrote other tracks that fit alongside of those songs. This is the sound of a band that has played together for awhile and put this album together from the ground up. It is truly a labor of love and it really shows that this band has become a tight-knit unit. Best of all, Rocky George (former guitarist of Suicidal Tendencies) recorded solos on this album.

The last element can be said as: "Dirty" Walt Kibby returns. The sum of Fishbone's sound has always been greater than its individual parts. In the same right, those individual parts play huge roles in makeup of the band.  Outside of guitar solos, the biggest thing missing from Still Stuck in Your Throat was Kibby. His vocal presence is a significant part of their sound as is his contribution to the horn section. This might sound like a minor thing and for other bands, the loss of an additional vocalist and/or trumpet player would be exactly that but Kibby's absence was anything but minor and on this EP, his presence is heard throughout the recording.

Musically, Crazy Glue is a 26-minute effort that combines the band's strengths (melodies, funkiness, musicianship) into a energetic, focused package.that in some ways feels like the long lost cousin to their 1996 release, Chim Chim's Bad Ass Revenge (a feeling further amplified after the revelation that the first two tracks were written by that album's lineup and producer for a followup album) fused with the unreleased EP that was recorded during their Hen House sessions. That combination gives these songs a rawness and energy that captures the excitement and passion still present in their live shows. This along with the impossibility of getting "DUI Friday," "Flutterbutter" and the EP's title track out of your head make Crazy Glue the pick of the week.
Knowledge Dropped by Bärrÿ

Email ThisBlogThis!Share to TwitterShare to FacebookShare to Pinterest
Labels: Fishbone, Pick Of The Week