Lost At Sea Is A Radio Program 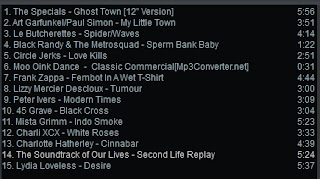 What started out as twice in a lifetime Ustream broadcast led to a one off DJ gig several weeks ago. This led, ultimately, led to a radio show which is the returning Lost at Sea

Episode one of Lost at Sea aired on April 7 on Free Radio Santa Cruz. The new format consist of an hour long program filled with music and a hodgepodge of sounds and samples. I planned to record segments for the first episode but was hit with a variety of  technical difficulties. I will record audio for future broadcasts as well as have the occasional guest playing songs and discussing their choices. It will be fun and by all means, send in your comments good and bad to hightowerandjones@gmail.com. Some of these I might even read on the air as well as write you back. Archival episodes will be posted here on Mondays. Keep listening and I hope you enjoy the show. Lost at Sea airs Saturday nights at 8 PM Pacific/10 PM Central Time on the first, third and fourth Saturdays of the month. Play it loud!!!