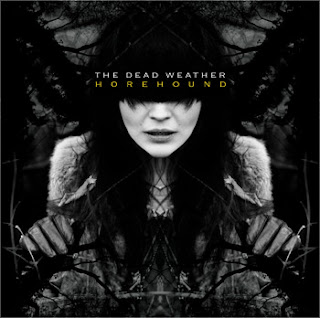 Horehound is the debut album from The Dead Weather, a supergroup featuring members of The White Stripes, The Kills, Queens of the Stone Age and The Greenhornes, is more than just another fuzzy, Jack White side project. It's a surprisingly good album in a time where the few supergroups that have formed in recent history have made nothing but mediocre albums. The key is The Dead Weather sound nothing like the bands the members come from.

The album begins with the PJ Harvey-like "60 Feet Tall" which serves as not only the album's opener but also a showcase for Alison Mosshart's reverbed vocals and Dean Fertita's fuzzed, blues guitar solos. This song gives you a good indication of what the rest of the album sounds like. "I Cut Like A Buffalo" features White on lead vocals as he sings over a catchy track filled with organ with an assist from Mosshart. "Hang You From The Heavens" and "Rocking Horse" are dark and dirty little numbers with great instrumentation and vocals.

This isn't to say the album is perfect. Whereas the songs are interesting to listen to and well played, the biggest problem for these ears was the mixing of the bass. Jack Lawrence's bass is evident on the album but for songs as creepy and dark as these, the bass should be turned up a little bit higher. It's a small thing but given that two of the members' bands feature no bass (or very little), it's would've been nice to hear some fuzzed out, overdriven basslines.

While most people will look at this as another Jack White side-project, the album's strength lies in Mosshart's vocals. They're creepy yet inviting as well as sinister yet teasing and playful (especially when she sings "I wanna grab you by the hair" then whispers "and sell you off to the devil"). The music itself is well performed given the short amount of time the band was around before the album's recording. Outside of the bass issue, it's a really enjoyable album worthy of the time and ears of any fans of the members' day jobs.

Recommended Tracks:
"60 Feet Tall"
"Hang You From The Heavens"
"I Cut Like A Buffalo"
"Treat Me Like Your Mother"
"Rocking Horse"
"3 Birds"

Horehound is in stores today or buy it here

As a bonus, here are a few clips of the band
The Dead Weather - Treat Me Like Your Mother

Email ThisBlogThis!Share to TwitterShare to FacebookShare to Pinterest
Labels: Reviews, The Dead Weather