Today's Subject: "Whoomp! (There It Is) 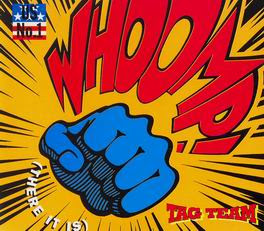 "Tag Team back again..." The thing is where did they come from to begin with. The world may never know but according to Wikipedia, it's Miami so I'll agree to that. In 1993, "Whoomp! (There It Is)" spawned a catchphrase, a jock anthem and a reason to use whoomp in everyday conversation. It also became one of the most overplayed and slightly annoying one hit wonders in Rap and music in general.

When the song came out, I have to be honest and say I liked it. Then again, I was on the verge of turning 13 and was excited whenever Basic Instinct came on cable. Sadly, I was also excited when I heard this song...well I was the first 100 times I heard it and before all of the remixes and variations of the song.

The song is a simple late 80's/early 90's Miami bass-style Rap song with snares and handclaps added. Added to that are very basic party rhymes that really are just filler until you get to the chorus. That's why this song sold lots of singles and achieved plenty of radio and video airplay. It's comes down to simplicity and a hook/phrase that people will say constantly. It's like Steve Urkel's catchphrase, "Did I do that?", with a beat and some rhymes wrapped around it.

Stadiums throughout America played song during timeouts, halftimes, inning changes and whatever else comes along with sporting events. I'm pretty sure you could find an obscure video of Scott Hamilton skating to it (if not, reinvent the 90's and make one up). As a jock anthem, it's ok but doesn't have the awesomeness of "Rock And Roll Part 2" or "We Will Rock You." Perhaps, that could be due to not placing "rock" in the title. In reality, it's just not as memorable as the other songs which is futher evidenced by the fact that only one part of the song could get you pumped up. "We Will Rock You" begins with footstomping and handclapping which builds up to you saying "we will, we will rock you." That is so awesome whereas "Whoomp (There It Is)" begin with a basic beat and a guy rhyming "Tag Team back again. Check it, wreck it, let's begin." That's really lame by comparision.

The video is much like every other 90's era Southern Rap video. Let's invite some friends, let's party, let's have some dancing and shouting, let's make a video. Granted, this was before the era of making people say "uhh" and watching people doing the "superman" but it's still really lame. The video, however, get all sorts of points for having Yo! MTV Raps' Ed Lover make a guest appearance but loses some of the same points for not having him do the Ed Lover Dance.

Another factor to consider is that it coined a catchphrase. While not a cool catchphrase like "Hammertime," it is infinitely cooler than "Who let the dogs out?" and it doesn't involve you barking. Like all catchphrases, however, if said too many times, it must perish. This was no different. Everybody was saying it from kids my age to professional business types in suits to your grandmother with Alzheimer's. You couldn't escape this catchphrase and that would kill the song more than any massive airplay. A song should become a soundtrack to a time in your life not neccessarily part of your vocabulary.

Last but, certainly, not least is important fact to consider about this song. Tag Team recorded and released multiple versions of the song (English, Spanish, remixed and re-recorded for the Addams Family Values soundtrack). That's way too much "Whoomp." The group had one hit and kept bringing it back with less and less success. Sometimes, you have to acknowledge you've made one hit and just move on.

Pros:
Ed Lover is in the video.
Memorable, if for nothing more than the chorus/hook.
The song, alone, gave Tag Team a platinum album.
Gave people a catchphrase.

Cons:
"Whoomp (There It Is)" is said 44 times in four minutes.
The only thing people remember is "Whoomp (There It Is)."
Does not show on Tag Team's "Best Of" in its original form but as remixes.
Did not live beyond the 90's.
Became a jock anthem.
Ed Lover does not do the Ed Lover Dance in the video.
Gave people a very annoying catchphrase.

The 13-year-old in me calls "Whoomp (There It Is)" a wonder but the reality is that it is a blunder. There's really nothing going on in this song. If you want a Rap song to kick off a party and it has to be a one hit wonder, go with "It Takes Two" by Rob Base and DJ E-Z Rock because that is one of the best one hit wonders of all time and is guaranteed to start a party. "Whoomp (There It Is)" is more likely to cause stares and an empty room. If you're feeling nostaglic, give the song a listen but be prepared for the disappointment you'll feel once the song ends.


Tag Team - Whoomp There It Is
Uploaded by louis-philippe93 - Watch more music videos, in HD!
Knowledge Dropped by Bärrÿ