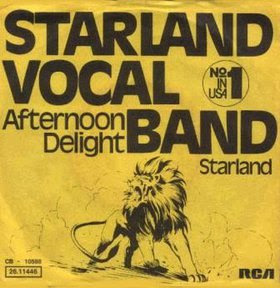 The song, musically, is a bit lame. Other than the vocal harmonies and the slide guitar, it just feels like a cheesy 70's Pop song. It's too laidback for a song about sex. Perhaps, this is my thought after growing up with songs like "Darling Nikki," "She Bop" and "Baby Got Back" but I feel like the music needs to be more exciting...like sex. Instead, you're getting something that sounds like what sex would be like in the days where showing a leg was considered arousing.

Lyrically, I'm on the fence about this song. It's not a particularly sexy song nor is it playful, yet it's pretty straightforward and has some awesome lines. In a way, it becomes slightly dirty due to the lack of metaphors. There's no mistaking as to what this song is about. That is cool and a bit above some of the songs of the 60's that used metaphors to describe lovemaking. Still, I would've loved to hear something more than "sky rockets in flight." What's sad is that I don't know what that means...then I guess it's a good metaphor.

Furthermore, the song is the perfect song to fit the 70's swinger, pornstache lifestyle. I'm certain there was plenty of activity to this song, maybe not as much as listening to Kiss at the time, but enough to warrant this song being a hit. Also, it still gets occasional airplay through Oldies stations as well the occasional appearance in films.

Pros:
It's about afternoon sex.
"Thinking of us working up an appetite. Looking forward to a little Afternoon Delight."
Was amusingly performed in Anchorman: The Story Of Ron Burgundy.
Vocal harmonies and slide guitar.

Cons:
It's a song about sex that's neither teasing, playful or sexy.
It's really cheesy.

It's a wonder but barely. Musically, it's too chessy to be a hit but there is something appealing about the song as a whole. It's a very interesting song for vocalists due to the harmonies which I find interesting. By harmonies, I mean two men and two women singing about "afternoon delight." I think you know that means. It means "sky rockets in flight" and I still have no clue what that means.