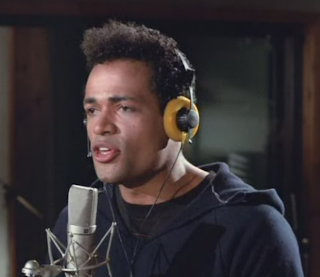 In the last 25 years, the portrayal of Hip Hop and Rap in film has been one of a tougher image. With the exceptions of CB4, Disorderlies and Fear Of A Black Hat, all of which were comedies, rappers have either beat up people, come from the mean streets or hustled to get ahead all while taking a break to rhyme for a scene or two. Rappin' contains none of this. Instead, it's an unintentional comedy about an ex-con gettting out of jail and becoming a rhyming Robin Hood. That says it all and should be the end of this but much like the movie being mentioned, it goes on and on.


Mario Van Peebles stars as John "Rappin'" Hood, an ex-con who returns home to his grandmother, little brother and his crew of rappers of dubious talents led by Eriq LaSalle and joined by Kadeem Hardison. While home, John and his brother rap about sneaking into x-rated films and how they're the Hood Brothers. That is until John goes to the club and sees the lady he loved before his time in the joint only to find out she's with his non-rapping nemesis, Duane. Ahh, snap. In addition to this, there's a developer trying to evict poor people and sending his lawyer or something to leave notices on doors.

This is where the Robin Hood element kicks in. The rest of film is about John Hood saving his neighborhood, overcoming his foes, an overweight guy eating everything in site, getting the girl and, what every Robin Hood-type film features, bad rapping. By bad rapping, it's really, really bad. Most of the rhymes were written by Mario Van Peebles which didn't help. Most, if not all, of the raps lack charisma in both lyrics and delivery. Also, Mario Van Peebles isn't believable as a rapper...neither is Eriq LaSalle but that's far more believable.

The ending is exactly what you would and can imagine. A town meeting, rich vs. poor, more bad rapping, etc. In fact, if you were to close your eyes, you could probably imagine the whole film even Kadeem Hardison's Civil War-era cap. Really, try it once and see what you come up with. If you see this... 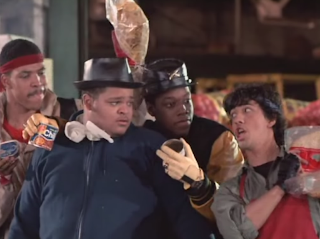 ...then imagine horrible rapping about food in a song called "Snack Attack" only to then wonder why there is an unwrapped, frosted cake sitting in a warehouse. This movie leaves more questions than it gives answers. 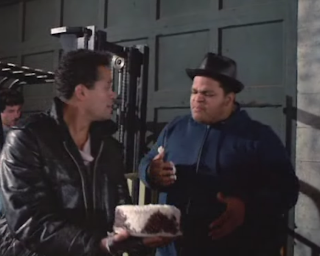 This movie features every 80's Rap movie cliche and worst of all, rapping. The only difference between this movie and the other 80's Rap films is that this is more of a musical. Well, that and the other films are much better (yes, even Beat Street was more enjoyable than this). Almost every scene contains some lame rapping number minus one courtesy of Ice-T. For some reason, three of the 80's Rap movies had Ice-T in them but this one had the best performance as it had him, future Body Count partner in crime, Ernie C, and Ice raps with an uzi strapped to him the whole time. If that isn't bad ass, I really don't what is anymore. 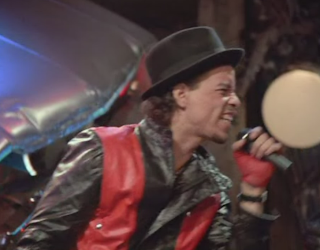 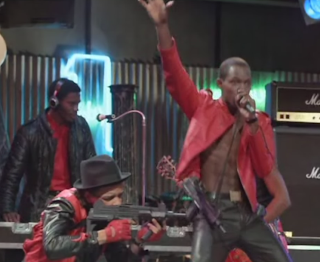 Rappin' is the kind of film you watch when you're bored on a weekend afternoon and there is nothing else on tv...nothing else. Sure you'll get a good laugh but is it worth it. Probably not but think of it this way, what else were you doing at time. Brain surgery...I think not.

As an added bonus (or if you're slightly curious), I, along with a friend, did a commentary track for this. Why you ask? It was better than just watching the movie on its own. Also, someone had to mock the film, although, I think the film does a good job of that on its own.

Download the commentary here.
Get the movie here or here.

In case, you couldn't picture how this movie ends. It ends with the John Hood and his crew battling Captain Murphy from Sealab 2021 in a town meeting. In fact, it looks a lot like this...