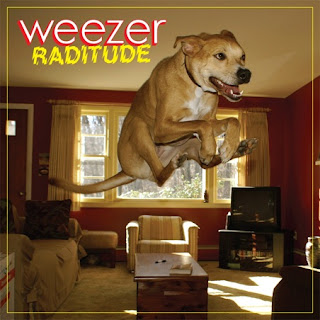 In one decade, Weezer more than doubled the number of their 90's recordings, releasing five albums since 2001. After releasing 2001's Weezer (The Green Album), the three following albums lacked consistency. They would start off strong and lose momentum midway or consist of a few great songs surrounded by uninspired filler. Raditude is definitely one of the most consistent albums since the band's reutrn. Does consistency mean that it is a good album or just better than the previous three releases? It's a little bit of both.

Raditude can best be described as friend who went through a few changes before becoming Goth. You find out about it and laugh before spending time with them and seeing that they are perfectly normal. Based on the horrendous title and poppy, Grease-esque first single, (If You're Wondering If I Want You To) I Want You To, the bar of expectations were set really low. The album, however, turned out to be a very pleasant surprise with a few missteps along the way.

The album begins with the aforementioned single, (If You're Wondering If I Want You To) I Want You To, a song that sounds and feels better within the album's context. On its own, the song feels like a lot of the Emo-ish, poppy Rock bands Weezer influenced. Not to say that it does not on the album but within it's own confines, it serves as the perfect leader for this album...well, definitely one titled Raditude.

The album second track, I'm Your Daddy, is a catchy little number filled with guitars, synths, handclaps and one catchy chorus. It is the one song on the album that you'll find yourself singing along almost every time you hear it. Another song that is shockingly catchy is "Can't Stop Partying." The track feels like the darker sibling of "Everybody Get Dangerous" (from Weezer (The Red Album)) and is made darker by a guest appearance from Lil' Wayne in which he raps about "partying like tomorrow is my funeral" after "mixing alcohol with pharmaceuticals." On top of that is a sinister synth track with minimal guitar. On paper, a Weezer song loaded with synthesizers, very little guitar and Lil' Wayne rapping should be a disaster but somehow it works and is surprisingly fun.

Elsewhere, All American Rejects' Tyson Ritter and Nick Wheeler join the band as co-writers of "Put Me Back Together" which sounds like an All American Rejects song which in itself sounds like something influenced by Weezer. It's not a bad song by any means, it just sounds like Weezer covering All American Rejects. Then there's "Love Is The Answer," the album's biggest misstep due to its sentimental, universal love via sitar approach. Placing it around the middle of the album makes the track stick out even more as the track that while lyrically fits, musically, it's an oddity on an album filled with rock, pop and synths.

On the last album, Frontman Rivers Cuomo allowed three tracks on the last album to be written by the other members of the band which, except for drummer Pat Wilson's contribution, "Automatic," provided the least interesting spots on that album. Here, the additional songwriting contributions of Jermaine Dupri, Dr. Luke, Butch Walker and others are assisted by Cuomo which give a sense of some stability as they're only co-writing. The lone track not written by Cuomo is Pat Wilson's "In The Mall" which like "Automatic" is excellent.

Raditude is not going to win any album of the year awards but, for Weezer, it's a step in the right direction to making one good or decent album instead of combining multiple different albums and tracks onto one album and hoping for the best. Name aside, Raditude is surprisingly enjoyable and, despite the additional help, the most consistent album Weezer has released in eight years. If you're still waiting for the sequel to Pinkerton, you're going to be thoroughly disappointed but if you just want a decent Weezer album, pick it up. If you do, invite some friends over to share "bottles of the goose."