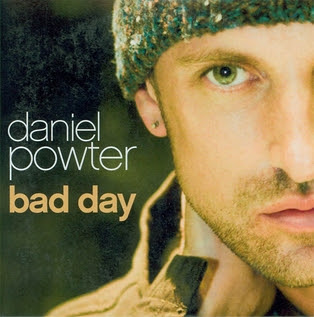 For the first time ever, the song up for debate is considered the "one hit wonder of the decade" according to Billboard. With that being said, what an honor it is to question the validity of the one hit wonder status behind "Bad Day" by Daniel Powter, a song so great that to hear it on American Idol meant while your Idol career was over, you could still have a successful career in film, music or just have the status as a person who did not win American Idol. Hey, in the end, it was better to hear that song than to win (ex. Taylor Hicks' success vs. the successes of Chris Daughtry, Kellie Pickler and Katherine McPhee. Look it up, the results and statistics do not lie). Was Powter's "Bad Day" a good day in disguise or was it a less lame day than the ones surrounding it but still bad in its own way?
"Bad Day" is one of those "Life Is A Highway" type songs where the singer wishes to express human sentiment through singing about the fact that we all have bad days. The difference is that his description is set to piano, drums and annoying vocals.
There...I said it. I find the vocals on this song to be a bit whiny. The first time I heard this song, I was easily annoyed by the vocals and then there's the music itself. It's a slightly poppy Coldplay song. Anything that can be considered to be Coldplay-esque is never good. In all fairness, this stems from the use of piano and the fact that it sounds like something Chris Martin would write on piano.

Musically, and beyond the Coldplay comparison, it's not that interesting of a song. It's very bland whereas an actual bad day invokes emotions and feelings. Well, I guess the feeling invoked here is that of boredom but bad days never resulted in slightly upbeat piano playing. That being said, that is a slight positive to the song. In the 80's, songs that were topical or dark generally had an upbeat tone to them. This song, in some regards, is reminiscent of that minus the catchy element that made a song like "99 Luft Balloons" so great.

The song's chorus/hook leaves a lot to be desired. It is not a bad hook since it is easy to remember and, if you wish to, sing along to. Like most one hit wonders, the chorus is the only part to remember as the lyrics carry the same poetic passion as Alanis Morrisette's "Ironic." Much like "Ironic," the song deals very little with the subject matter as the person has lost their passion for things but is not necessarily having a bad day. That, my readers, is misleading. In fact, the lyrics of "Ironic" are better suited for a song titled "Bad Day."

I know I've picked this song apart but let it be known that the song was No.1 on the Billboard Hot 100 charts for five weeks not to mention its No.1 placement on three other Billboard charts (Pop 100, Adult Contemporary and Adult Top 40. It only reached No.2 on Top 40 Mainstream). In addition to this, it peaked in the top 10 in 14 countries and achieved platinum or multi-platinum status in three of those countries (U.S., U.K. and Australia). All of that airplay resulted in a nomination for Best Male Pop Vocal Performance at the 49th Grammy Awards.

Pros:
A human experience we can all relate to through song.
A Grammy nomination.
The single went platinum in three countries and reached the top 10 in 14 countries.
The song was No.1 on the Billboard Hot 100 for five weeks.

Cons:
Annoying vocals.
Overplayed song via radio and American Idol.
The bad day alluded to in the title does not exist in the song and is expressed more as a feeling opposed to an actual bad day.
A very bland song musically.

Daniel Powter, you may have written the "one hit wonder of the decade" according to Billboard and with statistics like the those surrounding your hit, who can argue. This, however, is not about statistics and about the actual merit of a song. Therefore, "Bad Day" is a blunder. The song is less of a bad day and more of a boring day. It seems like a car should have ran over the protagonist's foot or they were caught in the middle of a bank robbery. Instead, you get the feeling that a bad day may have happened without ever knowing if it was a bad day. Also, I realize I want more of a literal meaning to bad day which is what Alanis Morrisette alluded to, to a degree, in "Ironic." Wait, is it ironic that "Ironic" is not called "Bad Day?"