Are you not going to Lollapalooza?  Did you not get a ticket? Perhaps, you want to kill some time for the later acts? Well, fear not as there are a variety of different things going on throughout the city. Here is a small sample of what else you can do this weekend.

Friday:
MGMT. The Brooklyn based band will perform a benefit aftershow concert at 11 p.m. at the House of Blues. A portion of the tickets purchased will go toward People's Music School and there will also be a silent auction. Click here for ticket information.

Lollapalooza Afterparties. There will be a couple of them going on consisting of DJ sets. So if dancing is your thing as is having a good time and, hopefully, meeting new people. Then check out either of these afterparties going on tonight: Stones Throw x Fools Gold Discotheque and Precision Guided Musicians. 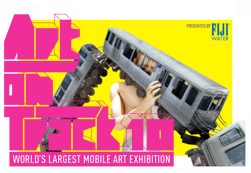 Art on Track. An eight-car CTA train displaying the city's diversity as well as that of the artists which will circle the Loop. Tickets are $10 and it runs (no pun intended) from 5-10 p.m. Find out more at http://www.artontrack.com/

Lollapalooza Afterparty sets. Saturday night features sets from festival performers Blitzen Trapper, Jukebox the Ghost, Minus the Bear as well as others. Most sets are selling out but you might be able to squeeze in if possible.

Last but not least, and if you are visiting the city, stop by Reckless Records on 26 E. Madison or Record Breakers on 2109 S. State Street and purchase some great music from some of the Lollapalooza acts or just to buy music in general.