Pick Of The Week: The White Stripes' Catalog 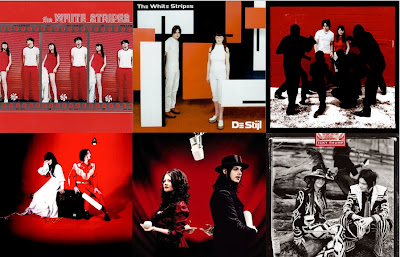 This week's pick became obvious the first second that the announcement was made. As you probably know by now, on Wednesday, the White Stripes announced the end of their 13-year career. The move was somewhat surprising but not entirely shocking given that it has been almost four years since their last studio album (Icky Thump) and tour and almost two since their last public appearance (a performance of "We're Going to Be Friends" on the final episode of Late Night with Conan O'Brien). Nevertheless, their sound helped provide some of the best rock singles and albums over the last 10 years and while there will never be another band like the White Stripes, their catalog is one that will played and studied for years to come. This week's pick is the White Stripes' entire catalog.
For a band that released six studio albums, one live album and countless singles, it is hard to believe that there is not at least one misstep, one dud in their catalog but the truth is there really is not. With each album, they managed to grow as a band by experimenting with their sound beyond the punky, garage blues of their first album by adding marimbas, pianos, bagpipes, song styles and the occasional Meg White vocal track, all of which added to the mystique and appeal of the band. The mystique and appeal being that you never knew what to expect from track to track and album to album. Honestly, after White Blood Cells provided the band MTV and radio airplay with singles like "Hotel Yorba," "Fell in Love with a Girl" and "Dead Leaves and the Dirty Ground," they, easily, could have phoned in a similar album with equal success. Instead, the public was given Elephant, an album, for the most part, louder and more abrasive than its predecessor which was followed by the bold left turn that is Get Behind Me Satan. Normally, a band with an ever-changing sound escapes their roots or ends up sounding like the band they influenced but the Stripes always sounded like an ever evolving version of their original vision.

If there was one criticism of the band, it was always the drumming with the basic issue being that the drums were too simple or too primitive. I can not understand this complaint. The truth is that Meg White added muscle and structure to Jack White's musical whims. Part of the reason that you are sitting there banging your head or tapping your feet to "Seven Nation Army" is the combination of the memorable guitar bassline and the pulsating kick backing it. When she is not keeping a steady beat, White then branches off into a steady thrashing beat. Just as Keith Moon's style was distinctive to the Who, Meg White is very similar in that regard.
As it would appear, I am getting completely off the subject which is the reason for their entire catalog being the pick of the week. The reason is in a time where autotune and American Idol are the standards for being a talented artist (said with no disrespect to the lovely Kelly Clarkson...call me), lame, clichéd rock bands spending more time applying thick shades of lipstick and mascara, spiking their hair and swinging their guitars than writing compelling music and the constant sales of Katy Perry and Ke$ha, the White Stripes were something of a bright revelation in the darkest of corners. Along with Queens of the Stone Age and, as I am now discovering, Sleater-Kinney, they were proof that rock is not completely dead and could still, in fact, rock (metal is excluded from this belief and will never die). Sure, MTV and the press were quick to lump them in the most idiotic classification of rock bands ever created, the "the" bands, with bands like the Strokes, the Hives and the Vines (mind you, none of these bands sounded anything alike or shared similar qualities unlike those of nu-metal, gangsta rap, new wave or grunge) but they never followed the hype surrounding them and, in turn, kept releasing amazing albums, all of which culminated with 2010's live album, Under Great White Northern Lights. As their final statement stated, "The White Stripes belong to you now and you can do with it whatever you want." I say you take their music and play it loudly. The pick of the week is the entire catalog of the White Stripes from every cover of "Jolene" and "Rated X" available to Jack, Meg and Holly Golightly teaming up on "It's True That We Love One Another." Go forth and reminisce!
The White Stripes...buy some if you do not own any.
Knowledge Dropped by Bärrÿ

Email ThisBlogThis!Share to TwitterShare to FacebookShare to Pinterest
Labels: Pick Of The Week, The White Stripes