Get Your Knees Flexing And Your Arms T-Rexing And Creep 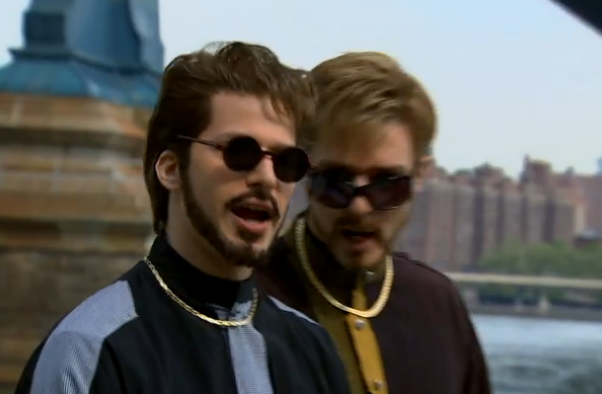 In stores today is Turtleneck and Chain

, the sophomore album by comedy trio and Saturday Night Live veterans, The Lonely Island. The trio, featuring actors/writers Andy Samberg, Akiva Schaffer and Jorma Taccone, are best known for their digital shorts which have ranged from PSA's on lettuce to people getting punched before eating and, most frequently, cats being used as laser shooting guns. Other shorts, like the ones featured in this piece, are focused on the musical side of the trio and are some of the funniest bits on SNL. Granted, The Lonely Island may not be your thing but how can you not laugh at any video about wrapping your genitals in a box and giving it to your lover for a special occasion set to a 90's new jack swing, r&b song. In honor of Turtleneck and Chain, here are five of the funniest music videos from The Lonely Island. If only, they had made a video for "Santana DVX" if for nothing more than to have rapper E-40 as Carlos Santana...if only.

1. "The Creep" (Turtleneck & Chain)
I am not sure if it is the concept of the dance or just the three of them creeping around but this clip makes me laugh very hard. It also reminds me of something one of my best friends would come up with on a dance floor. You probably will not find it that amusing after the first viewing but for me, this video is hilarious at its simplicity.

2. "Two Worlds Collide" (SNL Digital Short)
I am so disappointed to see that this did not end up on Turtleneck and Chain as it is beyond hilarious (which you will see on the DVD accompanying the new album). It's a simple premise as Kenan Thompson's character finds a red wig, puts it on and tells Samberg that he's Reba McEntire. Somehow, this leads to them having sex and "Reba McEntire" rapping about coming up and having a penis. Thompson sells the video with his impersonation of the country legend which easily ranks this as one of my favorite musical shorts.

3. "Young Chuck Norris" (SNL Digital Short)
One of the earliest digital shorts from the group and probably the most forgotten. That is a shame as it is funny on many levels in its own right and even funnier when you see the source material for the clip, a video called "America We Stand As One". Not only is it a parody of that clip, it is a video featuring a young Chuck Norris going around rescuing people and then beating them up as he "he kicked and punched his way from danger." What more do you need?

)
Finally, a video that explains followers of Phish and Jack Black's character in I Still Know What You Did Last Summer. I am only joking as this is a funny look at the upper middle class, white Rastafarian while in college, studying for mid-terms and toiling at Coldstone. Yes, those are truly hard times and we have this clip to make them funny.

5. "Dick in a Box" and "Motherlover" (Incredibad and Turtleneck & Chain)
They are a two-parter and, as such, deserve to be on the list together. One offers the suggestion of putting your genitals in a box as a holiday gift and its follow-up suggests that when does not work, offer your best friend's mother some loving on Mother's Day (as it also deserves a Mother's Night). The concepts are hilarious and self-explanatory. The execution of both is pure gold as all loving should be delivered in a box to your best friend's mother while rocking some early 90's dance steps and beards.

Email ThisBlogThis!Share to TwitterShare to FacebookShare to Pinterest
Labels: The Lonely Island