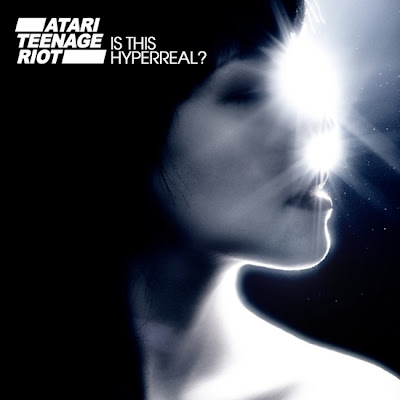 While beginning to enjoy punk and hardcore in high school, Atari Teenage Riot were my Sex Pistols. They were not a punk band in the sense of fashion, brash lyrics or three chord, two minute songs or a hardcore band in the sense of speed or, to a small extent, sound. They were a punk and hardcore band in the sense they were radically different, in both music and volume, than everything else that existed outside of the Digital Hardcore universe and even as part of that, they still stood out. They were completely unapologetic about it, only offering the statement, "riot sounds produce riots" over a distorted squall as their explanation.. For me, Atari Teenage Riot seemed like a amalgamation of the sonic fury of bands like Slayer and Black Flag, the anger and frustration at society found in hip hop groups like N.W.A. and Public Enemy with a layer of dissonant machinery propelling their sound away from dance club floors and onto dirty, bloodstained floors scuffed by Doc Martens with a pile of bodies dragged into the corner. They were German, they were awesome, and within years of reaching American shores with Burn Berlin Burn

(a compilation featuring singles and tracks from their first two albums, Delete Yourself

and The Future of War

Eleven years after their breakup (and 12 years since 60 Second Wipe Out), Atari Teenage Riot will release Is This Hyperreal?

on June 7. With Nic Endo stepping up to the front on vocals and the addition of emcee CX Kidtronik, the band are far from softening their vigor and venom due to time and age. The new album and the lineup recording it have very little interest in re-hashing the past and its history and accomplishments and, even better, one that does not end up sounding like the artists influenced and spawned during their absence. Instead, you get an album that sounds as much like the return of Atari Teenage Riot as it feels like what they would have sounded like had the band never ended and carried on into 2011. Even though the enemies and threats have changed and the world has become more electronic based, Atari Teenage Riot are still just as militant and ready to "start the riot" as ever, probably even more so than before.

Although, Is This Hyperreal? is due in stores on June 7, frontman/creator Alec Empire recently released a stream of it for NME's website (the stream can be found below). Last month, Empire gave The Quieus a track-by-track perspective of the new album which you can find here. Earlier today, Daytrotter posted a recent session with the Digital Hardcore trio which leaves you wondering how much of the Daytrotter studio is still intact and can be heard here. It may have been a long time but there has never been a better time than now for the welcomed, returning assault of Atari Teenage Riot.

Is This Hyperreal?
01. Activate!
02. Blood in My Eyes
03. Black Flags
04. Is This Hyperreal?
05. Codebreaker
06. Shadow Identity
07. Re-arrange Your Synapses
08. Digital Decay
09. The Only Slight Glimmer of Hope
10. The Collapse of History
Knowledge Dropped by Bärrÿ