Kimya Dawson At Schubas On December 7 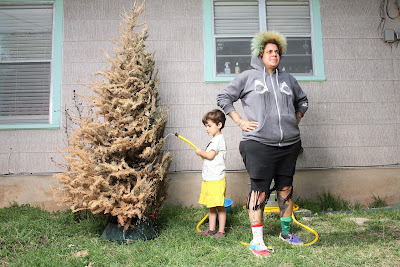 Autobiographical, honest and humorous are three accurate adjectives when best describing the work of Kimya Dawson. Hard working can also be used to describe her time since the hiatus of The Moldy Peaches in 2004. In that time, she has found a balance between family life and being one of most prolific artists of the new millennium. One could even go as far as describing her as the Lil' Wayne or Mike Patton for the indie folk crowd.

Dawson's newest album, Thunder Thighs, is one of the more enjoyable highlights of the year featuring sweet melodies about sobriety and the passing of a friend in addition to Aesop Rock (Labor Days, None Shall Pass) appearing on several tracks. Perhaps due to his appearance, there is a bit of hip hop influence working its way into several tracks on the album like the piano and snare drum backdrop of "Miami Advice" and the infectious delivery of the lyrics. Elsewhere, the stellar, 10-plus minute epic "Walk Like Thunder" recalls the moving story of the passing of a transgendered friend (as well as explaining the origin of the tattoo on her foot and its significance). For 65 minutes, Dawson paints pictures and shares herself as a person adding another strong collection of songs to her catalog as well as making her a very fascinating artist to watch.

In support of Thunder Thighs, Dawson will be appearing at Schubas on December 7. Undoubtedly, the intimate settings of the venue will seem more like friends hanging out with each other which is part of the  personable and openly engaging appeal and allure of Dawson's live show. Tickets for the event can be purchased here and definitely pick up her newest album here.