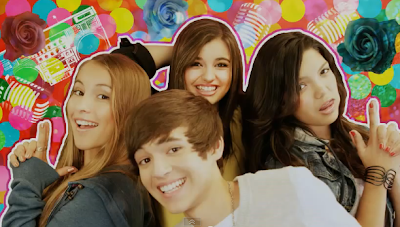 Oh, Rebecca Black. It seems like only yesterday that you wowed us with your hit single "Friday" and taught us that it comes after Thursday, before Saturday and Sunday and that we must get down on that particular day. Also, the debate over with seat she should choose presented 2011 with its biggest crisis since wondering how American Idol would survive in a post-Simon Cowell world. As amusing as the song was, it was never explained why and how she and her 13-year-old friends were driving places and partying late at night. At 13, all I did was play Sega Genesis, watch The Box and crush on girls I could not get then and, in many cases, still could not get now.

Sure many of us thought that was the last we would ever hear of her unless VH1 decided to revisit their I Love the (insert decade here) series. Thankfully, it was not which brings us to this entry. Black's video for her newest single, "Person of Interest" throws out the maniacal, carefree suburban setting of "Friday" and replaces it with the maniacal, carefree setting of an amusement complex where cops draw caricatures of Black and some Bieber-haired kid instead of taking witness statements. Meanwhile, she goes on to this poor cop, who clearly has no other crimes or calls to answer and check on, about her multiple dates with this kid from mini-golf to go-karts to a Chinese New Year event where they pretend to play guitars instead of actually playing guitars or at least a guitar based video game. Through this, Black somehow, and uninvited might I add, walks onstage and sings...what the hell is going on in this video? Also, for a lot of talking about crime scene and chalk outlines on dance floors, there is a lack of dancing and crime other than the constant singing about them in this video. So watch "Person of Interest" at your own risk and prepare to lose three minutes of your life but also gain three minutes to wonder why kids are still getting the Bieber cut despite Beiber not even having that look anymore, who actually constitutes Rebecca Black's fanbase and where does Batman get those wonderful toys.

In addition to this video, here is the ad that Kohl's is running for Black Friday parodying "Friday" because it is a) by a girl with the last name of Black, b) possibly still popular and way longer than it should have been and c) people forgot that Kim Kardashian had a single.