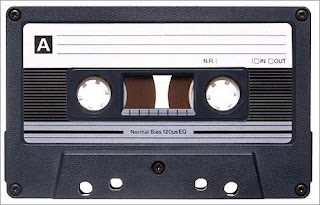 Side 1
1. Diary Of A Madman by Gravediggaz
2. All Mine by Portishead
3. Sick To Death by Atari Teenage Riot
4. Shimmy Shimmy Ya by Ol' Dirty Bastard
5. Beergut by Fishbone
6. Bobby & Joe by Hepcat
7. Your Woman by White Town
8. Vow by Garbage
9. Sweet Shop Avengerz by Bis
10. 20 Nothing by Skankin' Pickle

Side B
11. Hell Of A Hat by The Mighty Mighty Bosstones
12. Birthday Cake by Cibo Matto
13. Lorraine's Car by Cake Like
14. Tyler by Toadies
15. The Nurse Who Loved Me by Faiure
16. Eddie Vedder by Local H
17. Skull Of A German by The Jesus Lizard
18. Pay For Me by Whale
19. Elbow Room by Hurricane
20. Hooligans by Rancid
1994-1998 - During this period, Grunge died (some would say it never existed) and Alternative came to power. Punk became commercially acceptable because of MTV and Warped Tour. Rap and Hip Hop, thanks, in part, to the media, became coastal and forgot about the fun and battle rhyming for supremacy. Due to bands like No Doubt, Sublime & Reel Big Fish, Ska became popular only to fade away into commercial obscurity. Metal buried its spandex pants and cans of Aqua-Net only to combine the looks of 80's old school Rap, Gangsta Rap and Grunge with downtuned, 7-string guitars and was called Nu Metal (I still cringe at that title). Pop...well Pop was still pop, ballads and all.

There were a lot of bands passing through these ears and even more singles. Here is a collection of songs and artists enjoyed during my time in high school, from orientation to graduation. Some artists still record and still make great albums while others left their scenes ages ago. A lot of these songs I still listen to today. Instead of saying I had great tastes or that I listened to better music than my peers, I'll just say I left off Reel Big Fish, Savage Garden's "I Want You" and Limp Bizkit for a reason...but now you know.