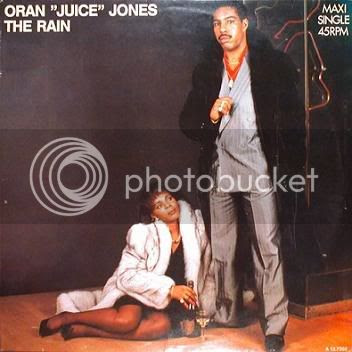 This is how people nicknamed "Juice" handle their women. They don't allegedly kill them, they write R&B/Pop songs about them and bust them for their infidelity at the end through stalking, hot chocolate and telling them that they're "cold busted."

This song is still one of the greatest singles of the 80's. A song about infidelity set over a sweet bass line, drums, keyboards, synths and the sound of rain where a man discovers that his lady is cheating on him with an "alley cat coat wearing, hush puppies shoe wearing crumbcake" and confronts her at the song's climax in one of the most awesome confrontations ever recorded. Period.

The best part of the song is clearly the confrontation. He invites her in and makes her comfortable by offering her hot chocolate and asking about her day only to say he knew the day was good since he followed her. Jones then tells her that she's been "cold busted" and don't enter the closet because all your stuff you came with is packed in the guest room.

Then he tells her that he's the "Juice" and without him, she's like "corn flakes without the milk." That is one of the greatest lines I've ever heard in my life. It is pure gold. All the time, he's doing this, the backing track of the song's hook is playing in the background serving as a constant reminder that you've been "cold busted."

Musically, it isn't just a great R&B song. it's a great Pop song. It is well crafted with great instrumentation and one of the best hooks of the 80's. Even if you don't know the lyrics or the song itself, you'll know "I saw you (and him) walking in the rain." Over that is a great bass line...a seriously great bass line. This song is the greatest song not written by or for The Time or Alexander O'Neal and that's what it feels like. It feels like a song that should have been recorded by The Time with the bass and synths or O'Neal due to the overall coolness of the track.

Pros:
The whole song.
"You without me is like corn flakes without the milk."
"Cold busted"
Awesome chorus and hook.
The video is great.

Without a doubt, it's a one hit wonder and an awesome one at that. It is almost criminal that this song never lived beyond the mid-80's. It wasn't until a VH1 special that the song was considered for entry. Now it is and this video is proof of the awesomeness contained in the track.