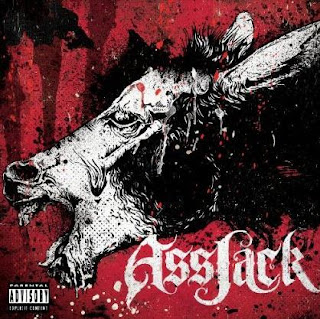 No one saw this coming not even Doc Brown and his DeLorean but this week sees the first official release of Hank Williams III's Hellbilly/Metal band, Assjack, and it's about time.

Since their inception, Assjack has been relegated to being no more than a concert staple for the second half Hank III's sets with the occasional bootleg release. Those who either stayed for the sets or heard the bootlegs were treated to the polar opposite of the country fueled numbers that made up his recordings as well as the titled legacy. The music was raw and furious with slight hints of country in the recordings and as time went on the songs started leaning more toward metal which is where we're at now and it is awesome.

Assjack is 31 minutes of unrelentless thrashing. Every song flows into the next and the instrumentation provides the soundtrack to the 31 minutes of brutality. Even though, the majority of the tracks have showed up on his self-released bootlegs and have been played for years, the songs still sound fresh and exciting.

"Tennessee Driver" opens the set with it's slow buildup of drums and guitar before speeding up the tempo and racing to the track's end with rapid fire bass and drumming. "Choking Gesture" uses double tracked vocals over the verses to give the headbanging track a creepy effect. The sped up punk-metal of "Cut Throat" closes out the first half only to give way to the electronic noise intro to "Smoke The Fire" which weaves in and out of a groove into it's heavier, faster parts. All of these songs are the perfect intros to the album's closing full-on metal assault, "Doin' What I Want."

Hank III's first non-country album originally titled This Ain't Country, ("Tennessee Driver" was to originally appear on said album). That title best describes this album as well. While that record was more hellbilly and rock, this album titile describes where Hank III has taken Assjack...into a world of headbanging and fast tempos.

Fans of his country leanings who usually check out after his first live set, you will definitely want to sit this one out as well. There's nothing resembling country anywhere on this recording. For fans of his Assjack material, by all means, purchase this album. It's studio recordings of eight previously recorded Assjack songs along with two new ones equally as good. For fans of metal, old and new, looking for something new, these 10 songs will keep your hair flailing and heads banging for 31 minutes...that is until you play it from the beginning again.