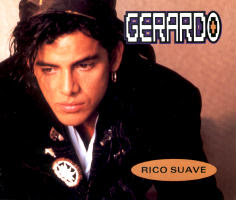 Yes, it is the question for the ages. How did a smooth Latin pimp like Gerardo have one hit song despite the fact that it required you to learn two languages and technically doesn't fit within the confines of a basic radio station format? The answer is I don't know but he did, it was and it did.

Armed with two simple words, Gerardo reached #7 on the Billboard charts in 1991. The next thing you know, everyone is saying "rico suave" in their sleaziest voices, some with an accent added for flair, and Gerardo is all over the place singing his tale of sexual conquests and seduction. A tale of sexuality that involves eating a woman "raw like sushi" and "how to deal with a woman that won't let go, the price you pay for being a gigolo."

As a kid, I thought this song was awesome because it was in two languages and to an extent, Gerardo seemed kind of cool. Looking back at this video and listening to this song, he is no more than a live action Pepe Le Pew but sleazier, if possible. The whole song is about him talking about how many women he can get. Even deeper than that, it's about commitment issues which are clearly on display given the shift in vocals from Spanish to English. It's like a rhyming Babelfish translation.

That is also the problem I have with the song. That can be really annoying if you want to sing along to it. This same annoyance, however, can introduce you to a new language. Never mind Babelfish, Gerardo was the 90's Hip Hop Rosetta Stone. All he wanted to do was romance the ladies and teach people how to rhyme in Spanish, shirtless if you have to.

Musically, the song is nothing more than a late 80's/early 90's club track. There's nothing special about the music presented here. Honestly, without Gerardo, this song would just be there. Without the hook of "rico...suave," this song probably would not have been as memorable. That may sound harsh but that little hook carries the song. A good example of that being the case is that a few seasons or so ago, Saturday Night Live did a sketch about the Napster hearings where people from the 80's and 90's came out of the woodwork to defend their songs against downloading and they referred to Gerardo as "Rico Suave." Enough said, enough said.

Pros:
Teaches people how to be a man-whore in both English and Spanish.
The video features Gerardo either shirtless or chest-exposed which appeals to women.
Two word chorus of repeating the song's title.
Did not live past 1991.
A bilingual top 10 hit.

Cons:
Constantly switching between two languages is really annoying.
The video features Gerardo either shirtless or chest-exposed which does not appeal to straight men...probably does not appeal to gay men either.
Other than the song's title/hook, the music isn't very memorable.
Did not live beyond 1991, the few reminders of the song usually occur is worst-of lists.
It's "Rico Suave."

Yeah, I'm going to call blunder on this song. No offense to Gerardo but this song could have only existed at one point in time and even that is questionable. It's rare to see a bilingual top 10 song and that is an accomplishment but the song, hearing it now, is not that great. Gerardo, that's the price you pay for being a gigolo...in 1991 anyway.

Email ThisBlogThis!Share to TwitterShare to FacebookShare to Pinterest
Labels: Gerardo, One Hit Wonder