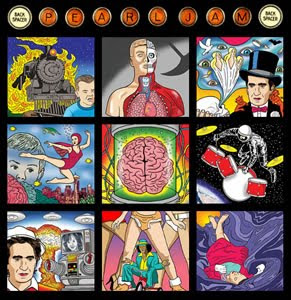 Pearl Jam returns with their ninth studio release, Backspacer, and it is quite possibly the tightest set of songs the band has delivered in a while. Clocking in at a little over 36 minutes, this is also the shortest album the band has recorded to date. With songs like these, who cares about length? I certainly do not.

In its simplest form, Backspacer is an album that band like Pearl Jam makes to return to their days of playing clubs and smaller gigs. It's short (the first four songs are barely over 11 minutes), the songs, for the most part, are straightforward Rock songs and the songs that aren't serve as nice, well-written breathers with the four minute epic, "Amongst The Waves" tying it all together. The album is devoid of filler and is definitely their most compelling album of this decade in their catalog.
Another way of looking at this album is say that it's an album made band that was finally free from several things and just wanted to make an honest Rock album. So far, their freedom makes for interesting music. They recorded the ballad "Man Of The Hour" for the Big Fish soundtrack after releasing 2002's Riot Act, their Epic swan song and anti-Bush statement. At the time of its recording, the band was was without a record deal and ended up turning out an amazing song that would've made either Riot Act or 2006's Pearl Jam better albums with its inclusion. Backspacer is like that but as an album. They recorded it on their own time and label and with that freedom comes great music. Also, given that we're now Bush free, what better time than now to just rock.

As for the songs, the first four tracks wiil essentially inform you that there isn't much flash to the album. With the fifth track, the introspective "Just Breathe," the album begins to take shape. Excluding the Punkish "Supersonic" and closer "The End," the remainder of the album is what Pearl Jam has been doing best with songs like "Black," "Smile" and "Love Boat Captain," making really good songs that aren't neccessarily powerful in terms of intensity but are powerful in terms of performance. "Amongst The Waves" slowly builds up with vocals and soft instrumentation until the chorus where it crashes like waves before leading to one of the best guitar solos on the album.

Backspacer is the album Pearl Jam has needed to make for awhile. It's not to say that they haven't been good records lately, it's just to say that they needed to rediscover what made their first three albums so great, it just rocked and was simple. Along they way, they, as a group, became amazing songwriters branching out with different recording techniques and sounds resulting in very diverse and satifying albums. This album combines the songwriting with the punch of their earlier material. This combination leads to one of the best albums in Pearl Jam's canon and one of the best releases of the year. With that said, after Living Colour and Pearl Jam's new releases, Alice In Chains, the ball is in your court.

Suggested Tracks:
"Got Some"
"The Fixer"
"Johnny Guitar"
"Amongst The Waves"
"Unthought Known"
"Supersonic"
"The End"
Knowledge Dropped by Bärrÿ