Brütality Has Never Tasted So Sweet. 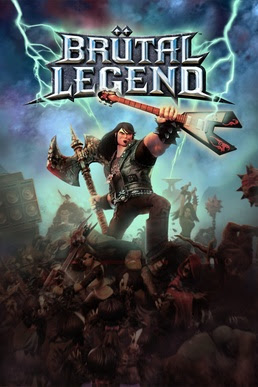 Aside from Gwar's appearance in Beavis And Butthead, Metal has only existed in video game form through means of guitar and band game. While it great to perform classic Black Sabbath and Iron Maiden riffs, there is still nothing like battling against armies while Mötley Crüe's Dr. Feelgood blares in the background. Thanks to Brütal Legend, you can now have this and so much more.
On the surface, it would be easy to look at Brütal Legend as a game for Metal fans with a bunch of celebrity voice thrown into the mix. After playing the game, you find that it, much like the look of the game, is so much more than that. It is a very intricate game filled with amazing battles, humor and some of the most detailed animation and level designs of the year. Once you start playing it, it definitely one of the hardest games to put down.

Brütal Legend tells the story of Eddie Riggs. While performing as a roadie for Kabbage Boy, a band who could best be described as Metal boy band with a DJ, he rescues the guitarist from falling off of a set piece only to be crushed himself. His blood seeps onto his belt buckle which comes to life, kills the band and transports Eddie to an ancient time filled with long haired, headbanging guys, rock monuments and Ozzy Osbourne as a merchant. Along the way, Eddie assists in a revolt against Lord Doviculus (voiced by Tim Curry) and treats it just as he would with setting up a concert performance (this, in itself, is great). Throughout the journey, you meet various characters through main and side missions including the Kill Master (voiced by Lemmy Kilmister) who has spiders that spin magical bass strings and learn that solos have the power to do more than showcase a guitarist's skill, they also can raise relics, call for you car and melt faces.

The game is in the style of a sandbox, Grand Theft Auto type game as there are plenty of side missions to go along with your main missions. Most of the side missions are nothing more than attacking the opposition and racing. If you're looking to just play the game and finish it, then this will not hold your interest. If you wish to play them, you can earn fire points which will help in obtaining upgrades and you will also meet Brian Posehn looking for a challenge. As you travel, you can find plenty of unlockables as well. Some of which will give you new songs, grant access to Metal Forge for upgrading yourself or Deuce, your car, or teach you a new solo.

Despite the music and the metal in-jokes, gamers and non-metal fans will love Brütal Legend. It is a game that works on so many different levels. It is brilliantly and beautifully designed with a story that is interesting and humorous. The voice acting is great especially that of Jack Black and Rob Halford who, along with the rest of the cast, never overact and deliver the lines with the perfect mix of humor and drama. The soundtrack is all Metal as it should be. It ranges from early 70's to the current sound of Metal. The soundtrack is at its best during the missions especially during one scene using Dragonforce's "Through The Fire And Flames" (although I really wanted to hear either "Car Chase City" or "Storm The Gate" by Tenacious D. Trust me, when you perform the mission and if you've seen The Pick Of Destiny

, you'll understand why either of these songs would have been great for the scene).

Brütal Legend is definitely one of the best Action Adventure experiences in gaming recently, even rivaling Batman: Arkham Asylum (another excellent game). If you love Metal and do not play video games, this is a place to start due to its in-jokes, soundtrack and usage of various Metal celebrities throughout the game. As for gamers, you'll love everything else about the game and continue playing it for hours just to unlock everything. Better yet, why are reading this instead of playing it? Go out and get some sun because once the game starts, it'll be awhile before you see it again.