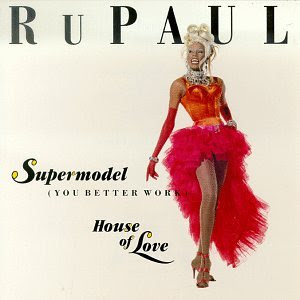 "You better work. Covergirl. Work it, girl. Give a twirl. Do your thing on the runway."

Oh that, RuPaul! Going on about how we should model. It brings me back to a simpler time of late night viewings of Basic Instinct or Softly From Paris on TMC right before Joe Bob's Drive In Theater, waiting until 9 p.m. to catch the newest Redman or K-Solo videos on Yo! MTV Raps and staying up late on the weekends for Headbangers Ball and 120 Minutes, or just waiting to go school the next morning and trading Basketball cards. In many ways, "Supermodel" reflects that simpler time but much like current times, I am no longer a 12-year-old and am not easily impressed by danceable Pop music with catchy hooks and drag queens...well most of the time, this is true.

For those born in 1990 or beyond, "Supermodel" is RuPaul's only song to chart on a Billboard chart other than Dance and for good reason, the chorus is memorable and easy to sing. People also like to dance. Whether this has anything to do with that is beyond me but they do. So when you have a 6' drag queen singing about how to work it and over an early 90's house beat, people will love it. It's simple science. So 12-year-old me, whose earliest introduction to the world of modeling with danceable music were courtesy of George Michael and Madonna, didn't dislike this song. This again had to do with a memorable hook.

Remove the hook and it's a pretty forgettable song better known as an early 90's club song. Most of them were forgettable with their layer upon layer of keyboards, leftover 80's dance synths and forgettable vocals about touching something, modeling something, being a gypsy woman or talking about everybody, and I mean everybody, striking it up (thankfully, C+C Music Factory never fell into this trap. They were all about the Rock!). That's where the problem with this song lies. It doesn't really go anywhere musically or vocally. After you've sung about working it, it just seems like the verses are filler until you can work it again.

What makes this song impressive is the period in which it became a hit. The song was big between 1992 and 1993 which means it found a chart placement among the masses of Seattle bands, Gangsta Rap and Ugly Kid Joe. Granted, that placement only went as high as No.45 on Billboard's Top 100 but still it charted and gave RuPaul her...er...his...RuPaul's first gold single in the day and age of cassingles and flannel. That's pretty impressive.

The impressiveness of this is minor when you realize that it's a one hit wonder that never really lived beyond it's time period outside of a couple of covers and rare performances, most of them courtesy of RuPaul. While not dated in terms of subject matter, the song, musically, could have only come from a certain period of time. It's almost like it's purpose was to fill in the gap until CeCe Peniston released "Finally."

Pros:
Memorable hook.
"Work...turn to the left..."
Charted despite the resurgence of Rock on the Billboard charts.
A gold single.

Part of me wants to declare it a hit but is it really? Sure it has a great hook and went gold but it really is a forgettable song that doesn't even get play on stations that play hits from the 90's. Sure, it made RuPaul a household name but beyond that it's just another early 90's club track not written by Cathy Dennis or CeCe Peniston and without the awesomeness of The KLF. Sadly, it is a blunder. RuPaul, you should have sashayed a little bit harder on this song and it just could have beaten Ugly Kid Joe on the charts...Ugly Kid Joe.

Email ThisBlogThis!Share to TwitterShare to FacebookShare to Pinterest
Labels: One Hit Wonder, RuPaul