Chunky A? Who Remembers This? 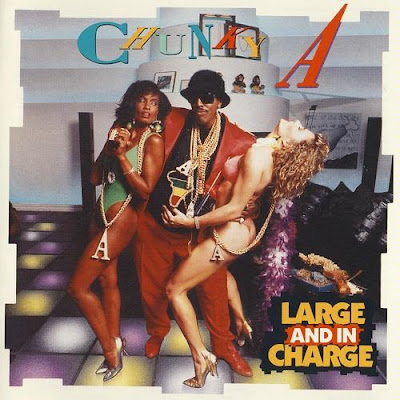 Seriously, who really remembers this? I seriously doubt Arsenio Hall wants to remember this. Nonetheless, in the late 80's, Hall adopted an rapping alter-ego named Chunky A and presented the world with an album rooted in 80's Rap, parodies of Cameo and Fine Young Cannibals' songs and, best of all, cameos from Ice-T, Paula Abdul and Wil Wheaton. Sadly, describing this album so far seems funnier than the album itself.

Oh, Chunky A, how we hardly knew you. Released in the Fall of 1989, Large And In Charge

was Hall's attempt at either making a very funny Comedy album or an absurd Rap album, or perhaps both at the same time. He failed at both and, as a result, the album was a failure as well. Luckily for him, he had a talk show career to fall back on.


Over the course of 41 minutes, Chunky A raps about lazy women, stinky breath and being drug free all while sounding like a combination of MC Hammer and Kool Moe Dee on their off-days. Normally, this would be impressive to a extent for an actual rapper, especially in 1989.  For Hall, it just feels weird because you're not sure if you should laugh or take it seriously.


For example, on the track "Very High Key," you get a song where the producer asks Chunky A to sing with a high, Prince-like vocal and how he does not understand "the connection between pantyhose and that big white egg." On the other end of the spectrum, Chunky A waxes on the negative effect drugs. While not funny, there is still a part of you that wants to laugh because it is Arsenio Hall as an overweight rapper named Chunky A.  Even that presents a bit of a problem as the album is not that funny. At the most, it is mildly amusing given who it is but lacks the humor and awesomeness of his late night show.


Chunky A's Large And In Charge is like the unfunny version of Arsenio Hall in Coming To America. He plays one main character but at the same time, he plays various characters such as members of his crew, himself and the title character in the "She Drives Me Crazy" parody, "Ho Is Lazy" (yes, the song is as bad as the title). In addition to his random characters, a saxophonist shows up Chunky apologizes for sleeping with his girlfriend's sister and microwaving her dog, and Ice-T and Wil Wheaton drop by to say "crack is wack" on "Dope, The Big Lie." What does any of this mean?


It means that in the grand design of novelty albums, Chunky A's Large And In Charge fits somewhere between Pat Boone's Metal masterpiece (No More Mr. Nice Guy) and Scarlett Johansson's take on Tom Waits (Anywhere I Lay My Head) meaning that it is worth the curiosity listen if you are a fall of Hall and or grew up in the late 80's or early 90's. Beyond that, it is no more than a very bizarre, vanity album. I wonder if Hall, when released it, labeled a section of people purchasing it "people who will still own this in 10 years" and proceeded to laugh. If so, you have won this battle Mr. Hall but seriously, I would like my dollar back.

Email ThisBlogThis!Share to TwitterShare to FacebookShare to Pinterest
Labels: Arsenio Hall, Chunky A