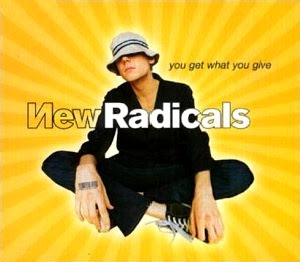 Today's Subject: "You Get What You Give

"Wake up kids, we've got the dreamer's disease." There is something be said about a revolution fueled by pop music. One thing is that it is not much of a revolution at all. For years, we have learned to revolt by using loud guitars, booming basslines and vocals that scream urgency. Somehow, New Radicals bypassed these tools and brought you a four and a half minute pop song that complains about fake people, the world, chroncles the plight of the late 90's suburban teenager and, most importantly, tells you that "you only get what you give." To think, all N.W.A. had to say was "fuck the police."

A few days ago, I mentioned the video for this song in Video Graveyard and then remembered that, sadly, New Radicals were a one hit wonder. This, of course, was due to frontman/creator, Gregg Alexander, losing interest and wanting to focus more on production and songwriting. Speaking of which, let us take a look into his first hit song.

Oh, the fall of 1998. I was heavy into metal and ska and years removed from truly knowing the greatness of Kate Bush. In fact, the world was surrounded by the sounds of 7-string, dropped d tuned guitars and cheesy pop music made for the squealing and screaming of teenage girls. Occasionally, you would get a break and hear a Goo Goo Dolls or Sugar Ray song, both whom recently began to shed their heavy sounds in favor of commercial acceptance. Then there was "You Get What You Give."

What...the 70's are back and in the 90's. Yeah, that best describes this song. It's a very 70's lite-rock sounding song built around a piano and featuring a guitar solo that, I'm almost certain, came from a Wings song. The biggest problem with this particular sound is that it sounds dated in a time when it was cool to be retro meaning that while the 70's were coming back, this sounds like a song influenced by that period and recorded in the 90's. It is like a cover song without actually being one.

The song itself has way too many messages in it. Concepts such as being true to yourself, never giving up and the music being in you are combined with an ending piece in which Alexander raps about late 90's topics like computers crashing and our fascination with celebrities being fake. On top of that, the messages are being delivered by a voice that really spoke for the youth at the time, uninterested and slightly angsty. Everything about the song feels like it wants to break free from its constraints but never quite does and that, perhaps, makes it accessable to so many people.

When I say accessable, I simply mean that it is a pretty catchy pop song despite the previous comments. It really was and, to a degree, still is. Granted, some of the pop glow to the track came from the fact it was different than a lot of the material on the radio at the moment. It had enough substance to prevent it from being just another pop song, enough lyrical toughness to avoid sounding like the newer Sugar Ray and Goo Goo Dolls material and lacked the full on angst that made Korn and Limp Bizkit very popular. All of these elements made the song successful. It was the song you play in front of your grandmother and then she talk about how she "smashed a Mercedes Benz" back in her day.

Despite the constant airplay, two things knock the song down a peg or two. One is that it was never nominated for a Grammy. Granted, I'm not a huge fan of Grammy awards but "You Get What You Give" was a hugely popular song. The song, alone, helped the only New Radicals album earn platinum status. Then again, was the song that popular as it only reached to No.30 and 36 on the Billboard Hot 100 and 100 airplay charts? For a song that you really could not escape, it seems like it should have charted higher.

It is still one of the most recognizable songs of the late 20th century, somewhere between Hanson's "Mmmbop" and  "Kiss Me" by Sixpence None The Richer. From the piano intro to the opening scream, it is a song that everyone has heard, loved, hated and remembers with varying results. This evidenced in its continual placements in televsion ads to this very day and the occasional airplay it receives on certain local radio stations.

Pros:
Has a message.
Infectiously catchy.
Dared to be different in the face of radio in 1998.
Still gets the occasional airplay.
Still used for television ads.
Propelled New Radicals into the mainstream and helped the album go platinum.
Top 10 hit in the U.K.

Cons:
The catchiness of the song borders annoying.
Somewhat whiney.
No Grammy nomination.
Never broke into the Billboard's Top 10.

This should be on the fence solely on the fact that despite the song's small achievements, the song was never rewarded or at least given a Grammy nomination. Hell, "Mambo No. 5" even got a Grammy nomination. Actually, that should make it a blunder. The song, however, still comes around at least once a year through some variation of airplay which means the song still receives royalties to this very day. That's pretty impressive and something that a lot of one hit wonders can not claim. Perhaps, had Alexander stayed with New Radicals, this article would not exist as their second single, "Someday We'll Know," had the ability to make the band even bigger and chart higher but radio barely touched it as the band had already broken up before the single was released and the video was shot. New Radicals, it looks like you have a hit song and are, now, one of music's greatest "what if" stories.