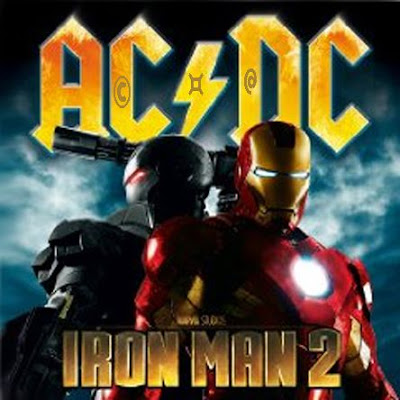 (note: this was a review that was rejected for an online publication.)
What best sounds the arrival of Summer better than a big budget, explosion filled action film? An action film with a soundtrack with just as much kick as the film it accompanies. When you think of Iron Man, images of explosions, metal, good versus evil and epic battles are instantly conjured in your brain, It is only fitting that AC/DC provides the tunes for the highly anticipated sequel.

Much like Who Made Who, the soundtrack to 1986's Maximum Overdrive, AC/DC pulls tracks from their entire catalog to create a soundtrack that fits alongside the danger and action contained in the film.  Even while listening to the soundtrack, you can almost visualize the film reels rolling as Tony Starks takes out the opening enemy to "Shoot to Thrill," flies around to "Thunderstruck" and cues the end credits with "Highway to Hell."  On that level, the soundtrack provides not only a great musical accompaniment  to Iron Man 2 but also a fun, fist pumping hour-plus sing-a-long soundtrack for the Summer.

Who Made Who, however, had one thing that Iron Man 2  lacks. It had three new songs to avoid it from being labelled as a greatest hits compilation which is what this falls into. A new song or two would provide interest for longtime fans and give them more of a reason to purchase this. For the casual fan, this is the perfect introduction to the power of AC/DC's sound without any of the sleaze or perversion.

Despite any new material, AC/DC still provides Iron Man 2 the soundtrack it deserves. It is an hour-plus of loud, head banging Rock anthems. The tracks may not be suited for Tony Stark but it is ideal for the action and heroics that usually come with Iron Man.