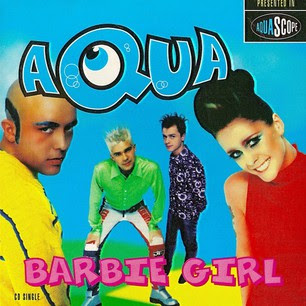 Man, oh, man, this is dirtiest song ever reviewed for this piece and I debated the merit of "Afternoon Delight." Perhaps, I am wrong and it is a song about artificial people living in their artificial world and how easy it is to  manipulate them. Simpler than that, it could just be a song about a plastic doll from Mattel and her lavish dream world. Nevertheless, it is one of the catchiest and cheesiest one hit wonders about plastic ever recorded.

"Barbie Girl" is one of those songs, much like "Whip It" that definitely has another meaning to it than what is on the surface. On the surface, it is a cheeky little song about a plastic doll and the life she leads from getting dressed to going to parties. Beneath the surface lies a dirty song, quite possibly, about blow up dolls. The song suggests that you undress the doll as well as touching, playing and calling it yours via use of your imagination. "Flat and plastic, it's fantastic," indeed.

I would be lying if I said I only remembered the chorus. Instead, I remember the chorus and all of the male parts to this song and often sing them in public to much laughter (mostly my own) and the horror of everyone else (minus the few people I pay to laugh along with me). That says a lot about this song (and less about myself). It should be a totally disposable novelty song but that chorus is a very memorable due to its simplicity. Add that to the weird sounds of the "Barbie Girl" in question going "ah ah ah yeah" afterwards, it is really hard to forget it. The verses, however interesting they might be, are somewhat forgettable, minus the male parts that sound more Rammstein than bubblegum pop. Then again, are there many one hit wonders remembered for their verses?

Still, the lyrics are a very interesting part to the track. Seriously, listening to the song now makes me wonder one thing: why did parents let their kids sing this song? As I stated earlier, this song is pretty dirty and filled with (no pun intended) references to touching, playing, undressing and begging on one's knees...yeah. Mattel noticed this and tried to take Aqua to court due to Barbie's newfound musical sexiness yet where were the mothers to stop their kids from singing such suggestively submissive lyrics. To be fair, pop music's history has been filled with song upon song of sexually suggestive lyrics and this song falls somewhere between "Whip It" and "I Touch Myself."

Musically, this song is either an Ace of Base throwaway track or dance track from the early 90's. That is a sad way to look at a song made in the mid-90's but it is the truth. It is Danish pop/club music made for the likes of teenage girls and clubs circa 1991 but made and released between 1996 and 1997, long after Club MTV's heyday. The fact is, however, despite the time difference, the song was pretty big and somehow won zero awards. Zero awards. There have been one hit wonders that have won awards and at least been nominated (even "Mambo No.5" was nominated for an award). Despite the lack of awards and nominations, the song has appeared on many worst and annoying lists in recent times (VH1, Blender, Rolling Stone) and considered to be cheesy goodness by others (MuchMoreMusic).

Pros:
It is a naughty song disguised a quirky, synth pop song.
"You can touch. You can play. You can say I'm always yours."
A very simple yet catchy chorus.
A Top 10 song in several country.
Sold million of copies worldwide.
Cartoon inspired video.

Cons:
It is a bit cheesy.
It sounds dated...very dated.
A very popular song...with no awards.
Regarded as one of the worst or most annoying songs of all time by several publications and networks.

This is one "Barbie Girl" that can continue living in her dream house located in one hit wonderland. Sure, the song is a bit annoying and about submissiveness with plastic dolls but it is also a very cheesy, bizarre song to sing along to...a cheesy song about submissive plastic dolls. That and it has weird metal vocals for no reason at all.

Email ThisBlogThis!Share to TwitterShare to FacebookShare to Pinterest
Labels: Aqua, One Hit Wonder