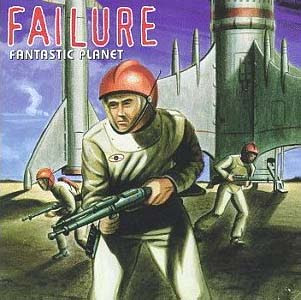 One of the best and most under-appreciated albums of the 90's, for me anyway, was Failure's final album, Fantastic Planet. From the amazing instrumentation and performances to the well crafted songwriting, it is an album that truly grabs the listener's attention and provides you with a collection of songs unlike any other on the radio. Also, it happens to be their best known album thanks to the infectiously catchy, "Stuck On You," which provided the band with a minor hit, an amazing video and a spot on 1997's Lollapalooza. Still, it was a album that many people missed out on at the time of its release.

On June 8, Warner Bros. is reissuing the album as a remastered, double vinyl set. If you missed the album the first time around, and happen to own a record player, this will be the version to own. Fantastic Planet was an album that sounded amazing for its time and still sounds amazing 14 years later but do not take my word for it, just buy the album.

Fantastic Planet remastered vinyl reissue in in stores on June 8. Buy it here

Email ThisBlogThis!Share to TwitterShare to FacebookShare to Pinterest
Labels: Failure