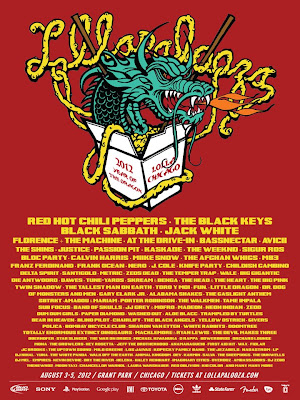 The lineup for the 2012 edition of Lollapalooza has been released. While I expected Red Hot Chili Peppers, Jack White and The Black Keys as headliners, Black Sabbath was completely unexpected and completely welcomed. Other highlights in the lineup include sets from the recently reformed At the Drive-In and The Afghan Whigs, Florence + the Machine, Franz Ferdinand, Childish Gambino, Frank Ocean, Metric, Band of Skulls, Jeff the Brotherhood, Aloe Blacc and Sharon Van Etten.
A video announcing the lineup was also released in conjunction with the announcement. With the addition of Black Sabbath, this is one of the more eclectic lineups for the festival and of course, there will an assortment of post-Lollapalooza concerts from the participating artists. The festival is set to take place over the weekend of August 3-5 and there are still three-day passes available here.
Knowledge Dropped by Bärrÿ