The most interesting NBA trade this week found LeBron James a new teammate to achieve his hoop dreams with in Shaquille O'Neal. This is big news for Cleveland and, quite possibly, the best lineup they've had in nearly 20 years. Not only does James and company lose the conference finals but they are rewarded with the greatest center/rapper in NBA history.
What's this you say? Great...rapper...you mean Kareem Abdul Jabbar's albums flopped? 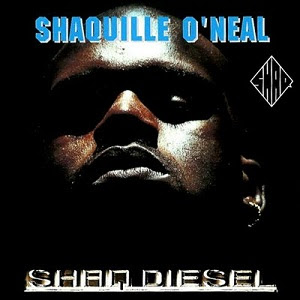 Yes, young ones, there was a brief period of time (by brief, I mean almost 10 years) where Shaq Attack was releasing Rap albums. I only bought one (the one that mattered) and then I made the decision to move on with the rest of my life. When I was 13, however, that one album was awesome. That album was Shaq Diesel.

That's right, I, along with over 1 million people, bought Shaq Diesel. Hell, I was excited about getting it after hearing "(I Know I Got) Skillz," a song that I thought was great when it released and, sadly, still enjoy due to the novelty factor. There's something about that synth flute backing track and Shaq's rhyming about "leaning on the Statue Of Liberty" when he gets tired that just appeals to me. On top of that, it's produced by Def Jef. Def Jef!!!

Then again, the whole album is produced by somebody who is/was a somebody in Rap at the time. Def Jef, Ali Shaheed Mohammed (A Tribe Called Quest) and Erick Sermon (EPMD) attached their names to the production of the album. Matter of fact, this album is mainly saved by all the guest appearences. Fu-Schnickens appear on a couple of tracks as does Phife from A Tribe Called Quest. All the guest producers and rappers make this album a novelty recording for a basketball player who drops his own name a lot and rhymes about basketball related things.

Sure, Shaq doesn't rap as much as he used to nor is he the young, menacing center that shatters backboards but one thing is certain. He isn't Kobe Bryant because Lebron, if you had gotten Kobe on your team, you would have to hear this...


which is not nearly as awesome as this...