Today, Hightower and Jones concludes their look at Wilco with... 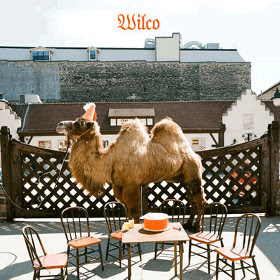 Wilco (The Album) keeps things simple as they revisit the past and look at the present while dueting with Feist...and no this isn't a greatest hits with new songs.
Wilco (The Album) is the culmination of everything the band has worked on up to this. In saying that, this is the first Wilco album that can be easily defined as a Wilco album. The experimentation of Yankee Hotel Foxtrot and A Ghost Is Born work there way into the tracks as does the Alt-Country sound of A.M. and Being There. The overdubbing of Summerteeth and the mellow accessability of Sky Blue Sky are represented as well. One attribute to this could be that this is the first Wilco album with the same lineup as the previous album.

One would then say that this might be their first truly consistant album. In reality, it is given that it combines all of their sounds and elements into one album. For some bands, this would lead to a clunky album loaded with filler but here, it works. The results are a much more interesting album than their previous release, Sky Blue Sky.

"One Wing" incorporates a drum track introduced by toms, hi-hats and short fills to go along with a beautiful guitar solo. The end guitar battles with the keyboard and electronic noise as it seeps its way into the song. "Deeper Down" fills like a throwback to the Being There period of the band's sound. It's very mellow and country but with just enough flare on the guitar to fit within the tracks of that album. "Wilco (The Song) is a nice opening number incorporating a sound similar to that of a track from Summerteeth. The only exception of a song not tying their past to their present is the Wilco-Feist duet, "You and I" and that turns out to be least interesting song in the bunch.

Wilco (The Album) is the most accessable album the band has made since Summerteeth. There are some experimentations of sound throughout the album but it doesn't influence the album's sound nor is it an album of mostly mellow, strightforward numbers. It's the middle ground encapturing everything that came before it. While not their best album or the best of their career this decade, it's still a pretty good album worthy of new and old Wilco fans.

Email ThisBlogThis!Share to TwitterShare to FacebookShare to Pinterest
Labels: Wilco