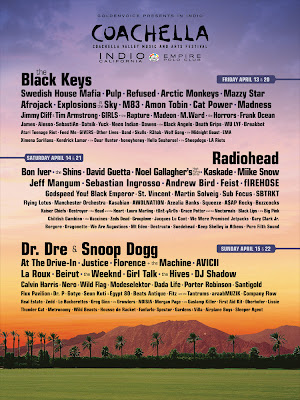 If you believe that the world is ending in 2012, then the fact that At the Drive-In and Refused are reforming and performing at this year's Coachella Valley Music and Arts and Festival might indicate that you, a Mayan calendar and a John Cusack film are possibly correct. For the first time, the festival will be held on two weekends (April 13-15 and April 20-22) and as usual is promising another year of amazing headlining performances featuring the Black Keys (Friday), Radiohead (Saturday) and Dr. Dre & Snoop Dogg (Sunday) as well as impressive sets from from the Shins, Cat Power, Mazzy Star, Childish Gambino, Band of Skulls, Wild Flag, Atari Teenage Riot, Madness, Frank Ocean and the reunions of  fIREHOSE and Company Flow among other artists sprinkled throughout the weekends. Make your plans now and prepare to get your tickets for the annual pre-summer concert extravaganza (which can be found here). If you, like myself, have been waiting years to see At the Drive-In, then there are very few reasons for you to miss this event...sell a kidney and donate blood if you have to.
Knowledge Dropped by Bärrÿ