Pick Of The Week: 9 Songs 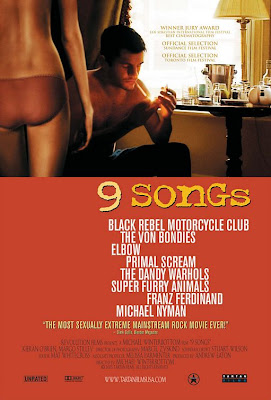 This week's pick is of a film from 2004 that I had the pleasure of seeing over the weekend. Upon its release, the film gained attention from its use of non-simulated sex involving the two lead actors more than the fact that it is, in my opinion, a solid film about passion, music and the memories that remain when everything ends. This week's pick is 9 Songs.

Director Michael Winterbottom's 9 Songs is the film I would direct if I were a filmmaker. It is honest and unique with a great soundtrack. It tells the story of Matt and Lisa, a couple that meet at a Black Rebel Motorcycle Club while Lisa, an American college student, .is visiting England. The two end up spending the night together followed by the next year having sex, traveling and seeing performances from the Von Bondies, Franz Ferdinand, Elbow and others. The story is told through the Matt's memories (good and bad) while doing a geological study of Antarctica. It is these memories which tell a lot about the couple. Most notably, the usage and power of sex in a relationship.

As stated earlier, this film drew controversy over the usage of non-simulated sex performed by the leads, Kieran O'Brien and Margo Stilley. For the prudish and young, there are shots of penetration, oral sex and ejaculation and on that note, it will never be a film that you would enjoy viewing. If that is all you are seeing, then you are also missing the whole point of the role of sex over love in their relationship. What starts out as urges and adoration for each other's bodies turns into a tool for jealousy, apologies and frustration. There is only love from the point of Matt as Lisa slowly begins to push him away emotionally. It is truly an adult, honest and experimental way for a film to treat sex in a relationship. It is not always pretty or sexy, sometimes it meant to work out things or just exist due to availability.

The film's title comes from the fact that there are nine performances in the film that the couple or Matt attends. These songs offer a frame for the beginning and end of their relationship through visual cues of them blissfully enjoying each other and the performance and/or lyrical content of the songs provided. "It's always better on holiday," Alex Kapranos of Franz Ferdinand sings in "Jacqueline," a line that best describes this relationship.  A song like The Dandy Warhols' "You Were the Last High" is perfect with its slow, mellow melody as here is a man reflecting on the sights, sounds and smell of a person from his past that still lingers in his thoughts.

A film like 9 Songs definitely divides people on what may or may not be acceptable in mainstream cinema but as a film buff and a music geek, I genuinely appreciated its somewhat minimal approach to relationship. Some would (and will) argue that there was no love between the two and no emotional attachment so what was the point and the film is just an excuse for sex and concert footage. I say that the lack of love was the whole point of their relationship as it was pretty one-sided and the concert footage helped tell the story and flesh out their time together. If you are looking for something a bit different (and have zero problems with full frontal nudity and sex), then watch 9 Songs. It has a great soundtrack, great concert footage, a straightforward story...and yes, there is actual sex. This is something that I have to reiterate so there will not be any surprises when you watch this film. That is the pick of the week, 9 Songs, so watch it and, preferably, not at work.
Knowledge Dropped by Bärrÿ

Email ThisBlogThis!Share to TwitterShare to FacebookShare to Pinterest
Labels: 9 Songs, Movies, Pick Of The Week