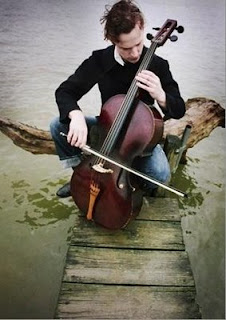 Recently, I had the pleasure of seeing and meeting Ben Sollee. He is a very talented musician from Kentucky who plays cello and writes great music. Also, he's a really nice guy. Did I mention he plays cello?
The best way to describe Sollee's music would be to tell you to listen to it. If I had to describe it, I'd say his songs are a mix of country and folk with a hint of soul. His vocals are soft and delicate yet passionate about the subjects he sings about. His songs recall what made so many soul, folk and country singers, songwriters and songs great. The usage of dynamics in both his music for cello and singing. The cello never outplays him nor does he sing over it. They work hand in hand with each other to provide a very interesting sound for a instrument not normally used in contemporary music.

Learning To Bend is Ben Sollee's debut album and it is a pleasure to listen to. By all means, if you come across this guy and are even slightly curious about him after hearing one song, definitely buy the album. If you have a chance, definitely see him in concert where his songs are even more impressive.

Either way, definitely check out his cover of Sam Cooke's "A Change Is Gonna Come." Definitely, one of the best covers of this classic song. A great example of his voice, his playing and his influences rolled into one amazing cover. Recently, I had the displeasure of hearing and seeing Seal cover the same song. While vocally, Seal had the ability to tackle the song with very little trouble, his band lacked the soul and conviction to deliver the song, its beauty and its message. Ben Sollee does not have that problem. Every note is played with feeling and meaning and is beautifully sung. That's how you cover the song.

Learning To Bend is the album which you can buy here

. Unsure...check out these three tracks from his album.