Bust it! Bust it and do it with an awesome bass line provided by Flea of Red Hot Chili Peppers. Doing this provided Young MC's with his first and only hit (as a performer. As a writer, he co-wrote "Wild Thing" and "Funk Cold Medina" for Tone Loc) and what a hit it was.

Like a rhyme-a-long version of Nike's slogan, "Just Do It," "Bust A Move" told listeners to stop waiting and just do it. Instead of making it into some life message, it was all about approaching the ladies. The man was dropping knowledge on how to get a woman. Essentially, make the first move by just talking to her or, hell, if she talks to you, respond and react. In over four minutes, he simplied human interaction and attraction toward each other. Why this man isn't teaching a sexuality or socialogy class is beyond me.

As for the song itself, the beat is undeniably catchy. The fact that Flea provides the bass for song makes it a great crossover track for all different groups of people who would've never listened to Hip Hop. As for the lyrics, I still feel compelled to rap whenever I hear them and still know all the lyrics to a song that's 20 years old. Lyrically, it's something we can all relate to. There are many times where I wish this song would've came on if I needed guidence with the ladies (sadly, I think the outcomes would still been the same). If played at a party, people will dance to it and it still gets airtime on some radio stations.

Pros:
Bass line provided by Flea who also appears in the video.
"You say neato, take your libido and roll to the church in your new tuxedo."
Written by the man responsible for "Wild Thing" and "Funky Cold Medina."
A lesson on what to do when you see someone that catches your eye.
Still a hit at parties and still gets airplay.
Catchy hook...a very catchy hook.
Won a Grammy

Cons:
If you know of any, please leave a comment. I have nothing.

It's safe to say that this song is not a blunder. Twenty years later, this song is still awesome. In this mind, Young MC's "Bust A Move" will always be a favorable and remind me of my younger, innocent years as well as the last days of the golden age of Rap and Hip Hop. 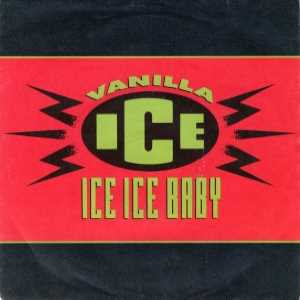 "Check out the hook while my DJ revolves it." I have to say, with very little shame, that I love Ice Ice Baby. It, like "Bust A Move," is just one of those songs from your youth that you remember and remember well at that. Yes, I will rap along to it if I hear it (once again, no shame).

People liked to trash Vanilla Ice and a lot of people still do to this very day. It's easy to understand why. He was a White MC that came from nowhere and became huge whereas 3rd Bass was on Def Jam and Beastie Boys hung out with Run DMC and released one of the greatest Hip Hop albums of all time in Paul's Boutique. On top of that, there were the clothes, the hair, the fabricated stories of his background, etc. Looking beyond that, here is a song that is seriously a good song and an accidental one hit wonder thanks to a radio DJ.

The song's instrumental hook is one of it's biggest strengths and weaknesses. It's an undeniably catchy hook using a sample of Queen and David Bowie's hit, "Under Pressure," handclaps, snare drums and a synth bass line on top of that. Take away the last three elements, however, you're left with an uncredited sample of "Under Pressure." A lot of early Hip Hop was built on samples but they were credited (well...for the most part). The worst part to that isn't even the uncredited sample, it's the fact that Vanilla Ice denied that the song was the same as sample used in his song. This along with many other things began to kill his career as it began.

Elsewhere, he was being taken outside to balconies by Suge Knight to pay royalties to a rapper who claimed to have written the song. Meanwhile, the song juggernauted to the top of the Billboard charts and was the first Rap song to do. In a way, Vanilla Ice helped out a lot of White MC's. First by suceeding in a genre where credibility and success weren't guaranteed due to his race and second, by becoming a novelty which made future White MC's try harder and come out stronger to avoid a similar fate. Sorry to say it, but if "Ice Ice Baby" hadn't topped the charts, who knows if Eminem would've been at No.1. The song charted higher than "Walk This Way" and "Fight For You Right (To Party). That's pretty impressive.

Pros:
Catchy hook.
First Rap song to top the Billboard charts.
Accidental hit.
Platinum selling single to one of the biggest selling Rap albums of all time.
Led to Cool As Ice and "Ninja Rap."
Also led to Ice explaining the difference in his song's hook and the Queen/Bowie sample.

Cons:
Denying "Under Pressure" sample.
All the lies that followed about his past.
Single's popularity introduced him to Suge Knight who introduced him to a 15th floor hotel balcony.
Led to Extremely Live (still not sure why there's a live Vanilla Ice album).
Also led to Ice explaining the difference in his song's hook and the Queen/Bowie sample.

I'm on the fence with this one. I still like the song but denying samples is not cool at all. That and Suge Knight shaking you down for royalties...I just don't know. As of now, it's undecided and up for further review. Ice was in deep water but he hadn't melted completely yet.