One Foot In The Soulmanure

Today, a reissue of Beck's 1994 indie-folk classic, "One Foot In The Grave" hits stores loaded with all the greatness of the original album as well as 16 bonus tracks of unreleased material and 7" tracks. It, at the time, was seen by the public as an odd release given Beck's popularity with "Loser" but respected by critics as it showcased another side of Beck briefly hinted at on "Pay No Mind." As time passed, this record became an out of print item and one song, "Asshole," found its way to Tom Petty who covered it on the soundtrack to "She's The One." Although it is great to see this fantastic album reissued, what about the other Beck album from 1994? 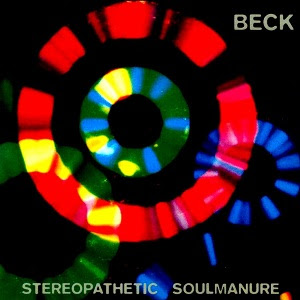 Stereopathetic Soulmanure is definitely one of the strangest Beck releases. Bizarre skits about playing Pac-Man in 1945 and songs with distortion, humor, rowboats and Satan giving people tacos. When it's neither of these things, it's a country-esque, folk record. Like a weird combination/outtake compilation of Mellow Gold and One Foot In The Grave, some of these songs could have appeared on either record (in fact, Beck re-recorded Thunderpeel). These songs chronicle a five-year period of Beck's early songwriting leading up to his breakthrough. The recording quality varies throughout the album just as the songwriting varies. If nothing else, Steropathetic Soulmanure is a very interesting footnote in Beck's career. Although not the earliest of Beck's releases (Golden Feelings and A Western Harvest Field By Moonlight were earlier independent releases), it's a interesting starting point and a reference guide to one of the most acclaimed and widely respected artists of the last 20 years. Also, Johnny Cash covered "Rowboat" which says a lot about Beck's songwriting on this album.

So if you're a younger fan of Beck who missed out on his experimental, slacker days or are a new fan, definitely pick up the reissue of One Foot In The Grave

. It's a good way to reintroduce yourself to the artist who coined the phrase "Beck-tionary."

"He's A Mighty Good Leader" from One Foot In The Grave can also be found on this month's mixtape, "Del Cahill, American Hero."
Knowledge Dropped by Bärrÿ

Email ThisBlogThis!Share to TwitterShare to FacebookShare to Pinterest
Labels: Beck