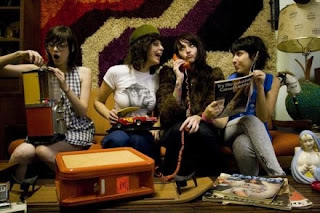 Every so often, a band comes around that is refreshing and fun. A welcome break from the "I'm serious and my music is meant to solve world hunger and wars" or "now that we're the biggest band in the world, let's experiment with our sound because fans will buy anything we release" type bands that many artists end up becoming once they find success, fame, money and, on occasion, drugs. Sometimes, you just want to let loose, rock and have fun listening to music.

Ladies and gentlemen, I present The Coathangers.

This band came to my attention from reading an article about them and their upcoming album, Scramble (in stores April 7th). The article intrigued me so much that I wrote the band's name on a loose receipt in my wallet to look up later (in case, my old mind were to forget). After coming across a few of their songs and their website, thecoathangers.com, this band, without a doubt in my mind, is one of the most refreshing, up and coming bands I've heard since the recently disbanded Be Your Own Pet.

The Atlanta quartet's sound could best be described as a mashed up combination of Raincoats-esque Punk, 90's Riot Grrrl and Pop with a sense of humor. It may sound like a strange combination but it works. Songs like "Parking Lot" and "Parcheezi" have catchy hooks due to catchy, fun instrumentation whereas a song like "Don't Touch My Shit!" just simply rocks (if you love the title, the song is definitely worth hearing...totally deserves the exclamation point). There's a definite sense of this band still being fresh and new at the time of the self-titled debut's recording (they had been together for roughly a year) and on certain songs it shows. That is part of the charm of the band. It's that they were a new band, still learning their instruments and capable of writing good songs. That's an impressive feat and a sample of the band's potential.

Add two more years and various performances to the band, you have their new album, Scramble. Judging by such titles as "Getting Mad and Pumping Iron" and "Arthritis Sux," it will be a interesting sophomore album for a band you'll, in one way or another, definitely hear about throughout the year. Scramble

is out this Tuesday, April 7.

The Coathangers is available here

. Unsure...check out these three tracks from their self-titled debut.
Haterade
Shut The Fuck Up
Parcheezi

Email ThisBlogThis!Share to TwitterShare to FacebookShare to Pinterest
Labels: The Coathangers