Ahh, the double one hit wonder. It is a rarity but happens occasionally. A song is so popular and so great that the song can be covered years later in a different genre and become a hit for another band. "Funky Town" is one of those songs.

As a hit for Lipps Inc., the song had just enough funkiness not to hate the fact that it was a product of the late Disco era. Combining the sounds of disco beats and funk guitar helped make it cool. More than that was the synth hook and chorus. Both are simple and straightforward with nothing flashy about them. That's why the song was so popular. You could dance to it and hum the song later as each note picked away at your brain.

As the years passed, Disco was demolished, thrown away and left to stay in the confines of the 70's and Studio 54. Parts of disco weaved it way into other genres and synthesizers became a huge part of the 80's sound. As this happened, "Funky Town" found a new home in a version combining rock, pop, synthesizers and, most importantly, a keytar. Thanks to Pseudo Echo, this version, too, was a hit. 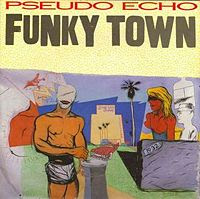 Everything that could be identified with the stereotypical 80's sound were in this cover. Big drums, an Andy Taylor (of Duran Duran) inspired guitar sound and lots of synthesizer, both for keys and drums. The guitar solo even sounds like it could only been recorded and written in the 80's. The recording sounds like Riptide and Power Station-era Robert Palmer. This isn't a bad thing, just an observation.

As for the song itself, it is a fun simple song that you will find yourself humming along too or, if you are inclined, can sing to. It is also a fun song that, until Pseudo Echo's cover didn't really go anywhere. Their use of a guitar solo broke up some of the song's repitition, however, still doesn't go anywhere in terms of the lyrics or melody as is the case with a lot of the songs from the Disco era.

Pros:
Catchy hook.
Simple melody that you will hum or sing whenever you hear it.
A Top 10 hit by two different artists in two completely different genres.
A popular reference for cartoons especially if they are a pot smoking, government engineered towel.
Still licensed in commercials with Psuedo Echo's version in a computer ad a couple of years ago.
One of the best songs of the Disco era.
Written after Disco Demolition Night.
A song about an imaginary town probably fueled on Disco music and cocaine.

Cons:
The lyrics are too repetitive.
While the song is fun, it wasn't until the guitar solo was added that the song went anywhere.
It's known as the song that helped save Disco...well, prolonged its life a little longer than needed.
Written after Disco Demolition Night.
A song about an imaginary town probably fueled on Disco music and cocaine.

I will say it's a definite hit but barely. Too much repetition but due to its catchy chorus and hook, you can overlook it to a degree. Also, the song was used in South Park by a pot smoking towel. That's pretty awesome, however, I am still waiting for a rap version of this song. Soulja Boy, the ball is in your court.