Since the beginning of this blog, one suggestion that has constantly been brought up is that there needs to be rating system of album reviews (and that there should be more album reviews). This is a suggestion that I have agreed with but never got around to implementing. That was the case until now. I thought long and hard about what would truly explain how much an album truly rocks and realized that there is only thing that can truly explain this on a scale from one to five. 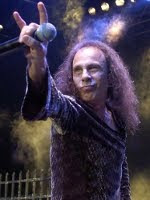 Yes, from here on out, this picture of Dio will be the basis of album reviews with one being the lowest and five being the highest. It is a tribute to man who rocked hard for four decades until his untimely passing this past spring as a way of saying, your album better bring the goods. Any previous album reviews will incorporate the new system by the end of the week.
Knowledge Dropped by Bärrÿ