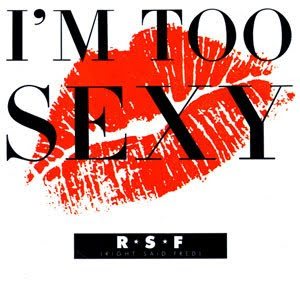 At some point in the early 90's, the world of pop music became model obsessed. No longer were musicians just dating models or adding them to videos for eye candy, they became the videos. Two George Michael videos ("Freedon '90," "Too Funky") starred models, En Vogue became models ("Free Your Mind") and RuPaul sang about them ("Supermodel"). It was Right Said Fred, however, who made models too sexy for things. They might even be too sexy for inclusion in this feature.

Finally, a tongue-in-cheek song that says what we have all been thinking about our inner supermodel. Even at my sexiest, age 12, I loved this song and always watched the video whenever it aired on MTV or The Box (yes, I am old enough to remember this song's popularity and The Box). At the time, this song just seemed like a very catchy, albeit, silly song with a great hook. A song that was unlike any other dance or pop song out there in that it had a sense of humor. How could it not? It was a guy walking around talking about he was too sexy for things.

In reality, this song is not just about the perception of models being sexy, vapid people. It is about people who find themselves too sexy for life and how their shallow existence makes them dull and uninteresting and, more to the point, humorous to us sexy types that peaked at 12. Okay, it really is not about all of that and it is really just a tongue-in-cheek look at a model's lifestyle.

Sure, it is a guy singing in a slightly deadpan voice talking about being too sexy for cars, hats, shirts and cats. This repeated declaration of sexiness landed the song on Blender's Worst 50 Songs Ever list at number 49. Humor aside, it is easy to agree with the annoying factor of this song as it is a very monotoned vocal track being too sexy for a melody. Also, it spawn a wave of people claiming to be too sexy for things. Sometimes, the worst thing about being a one hit wonder is spawning a catchphrase from said one hit wonder. Luckily, this did not last long because people moved onto the next hit, the next catchphrase and, within a year or so, we would soon try to understand "Whoomp! There It Is."

The song, musically, is a bit infectious. It has a great hook and most of the time, you will find yourself bobbing your head along to it. It, like the lyrics, can be very repetitious but offers some variation than just repeating the same parts throughout. Little things like using the piano to play the hook at certain parts or the small bass part in the middle of the song help the song from becoming a generic club hit with programmed drums and synths and move it into cheesy pop territory.

The song's popularity is a peculiar thing as it reached the top 20 in 11 countries but was not number one in Right Said Fred's home country of the U.K (their third single "Deeply Dippy" became their first and only number one hit despite have several top 20 singles...yes, several). Furthermore, it is not a song often played these days on flashback hours or retro radio stations. It, however, does show up from time to time when there is a need to reminiscence on 90's cheese.

After 15 years, Right Said Said brought the song back into the mainstream with an updated version of it that really only updates the guitar part and the video. In a world that sees glamorous models and actresses at every turn, the humor is a bit lost. The air of the shallow, vapid and mysterious model is not there anymore thanks to America's Next Top Model. Also, since music has changed so much since the early 90's, the song sounds dated when remade now especially if it sounds very similar to the original and if recorded by the same band.

Pros:
Catchy hook.
Memorable lyrics.
Number one in several countries.
Not number one in their home country.
Great bass line.
Remade the song and charted at 56 on U.K. charts.
Funny song.

Cons:
Not number one in their home country.
Lyrics, although humorous, can be annoying.
Spawned a catchphrase.
Sounds dated.
Band covered their own song without drastically changing it.
Rarely heard beyond a list of the '90's.

It is a one hit wonder, but it is barely a one hit wonder. It is as funny as it can be annoying and as catchy as it is dated. Still, there is a charm to this odd little song and I have to say that I enjoy its charm. Granted, if the song annoyed you then, not much will change your opinion of it now but still give it a listen. You might be genuinely amused by it now. Then again, my sexiness peaked at 12 so what do I know.